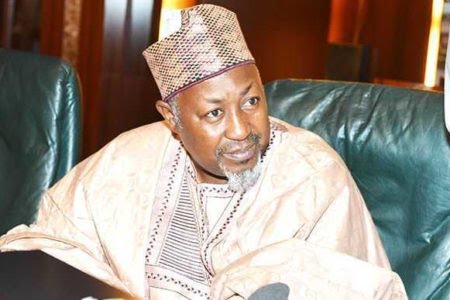 The Governor of Jigawa State, Muhammad Badaru has disclosed that 122 Almajiris recently repatriated from other states have ptested positive for Coronavirus.

Badaru, made the disclosure on Wednesday while addressing newsmen.
According to him, the state received 1,345 Almajiris repatriated from Kano, Nasarawa, Gombe, Adamawa, Plateau and Kaduna States.

He stated that the Almajiris represent 51 per cent of the state’s Coronavirus cases.

He said: “They were quarantined at the NYSC orientation camp. All of them were tested for COVID-19. At the end of the quarantine period, 122 of them were COVID-19 positive.”

Those who tested negative, according to the Governor were discharged after receiving clothes and N10,000 welfare allowance from the government.

Badaru also told newsmen that the state government has mapped out a strategy to integrate Almajiri and Tsangaya education to the mainstream education system.

He also stated that the Jigawa has strengthened its response to COVID-19 following the establishment of a testing laboratory in the state.