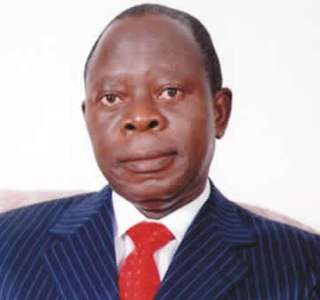 The National Chairman of the All Progressives Congress, Adams Oshiomhole, has accused the Peoples Democratic Party of being reckless in its utterances relating to the recent Supreme Court judgement which removed its candidate, Emeka Ihedioha as governor of Imo State.

Oshiomhole, who addressed a press conference in Abuja on Friday said the PDP believed it was its “birthright to benefit from electoral fraud.”

The APC Chairman’s Comments were in response to a call by his PDP counterpart, Uche Secondus, that the Chief Justice of Nigeria, Muhammad Tanko should resign and Emeka Ihedioha should be returned as Imo State governor.

Recall that the apex court had in a unanimous decision on Tuesday declared Hope Uzodinma of the APC as the rightful winner of the 2019 governorship election in Imo State and ordered that he should take over from PDP’s Emeka Ihedioha.

Reacting to the Supreme Court’s decision, Secondus accused the court of acting out the script written by the executive arm of government.

He said Nigerians had lost confidence in the apex court under the leadership of Muhammad Tanko and called on him to resign as the CJN and chairman of the National Judicial Council.

Oshiomhole however, in his own comments said calling for the resignation of the Chief Justice of Nigeria was the height of recklessness by the PDP.

He noted that the statement by Secondus was not only designed to intimidate the judiciary but to incite civil unrest in the country.

According to him, the results used to declare Ihedioha as governor showed he did not get the required one-quarter vote in two-thirds of the 27 local government areas of Imo state.

The APC Chairman berated the Imo state Returning Officer, Prof Francis Otunta, for not knowing that 12 was not 2/3 of 27.

He said, “That Returning Officer ought not only to be dismissed but should face the consequence of his action. It was the height of irresponsibility on the part of Independent National Electoral Commission to condone such action.

“A professor of mathematics curiously did not know that 12 is not two-third of 27 local government areas and proceeded to unlawfully declare Emeka Ihedioha as governor of Imo state.

“In a society that is committed to fairness and rule of law, that returning officer ought not only to be dismissed but he also ought to have reported himself to the security how he arrived at the decision to declare Emeka Ihedioha as governor.”

He therefore stated that by declaring Uzodinma as the duly elected governor of the state, the Supreme Court only corrected the wrong in the Imo governorship election.