President Muhammadu Buhari has expressed shock and grief over the death of the Emir of Zazzau, Alhaji Shehu Idris.

The Emir died on Sunday at the Military Hospital, Kaduna, on Sunday after a brief illness.

In a condolence message to Governor Nasir El-Rufai, the government and people of Kaduna State, signed his Senior Special Assistant on Media and Publicity, Garba Shehu, the President Buhari said:

“With the passing of Alhaji Shehu Idris, Nigeria has lost one of its longest reigning traditional monarchs whose contributions to the promotion of unity and peaceful coexistence among Nigerians cannot be forgotten for years to come.”

According to the President, ”The Emir of Zazzau who ascended to the throne in 1975, had used his long reign to serve his people with dedication and identified with their aspirations at all times.”

He prayed to Allah to forgive the late Emir and grant his family and subjects the fortitude to bear the loss. 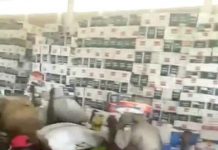