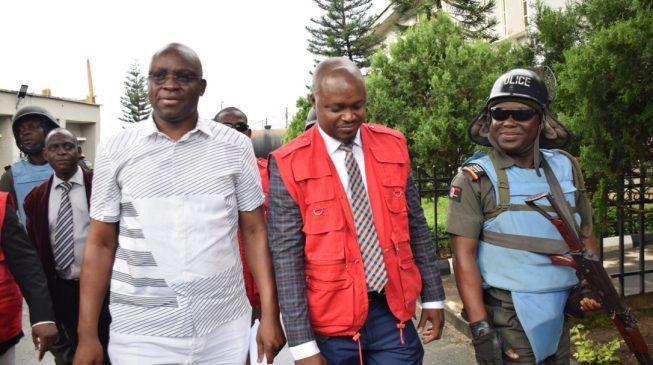 Former Governor of Ekiti State, Ayodele Fayose, has been granted bail in the sum of N50 million.

He is standing trial before a Federal high court in Lagos on an 11 count charge bordering on fraud.

According to the terms of bail, Fayose’s International Passports is to be submitted to the court, he is also to provide of surety with three years tax clearance.

The Economic and Financial Crimes Commission, EFCC, on Monday, October 22, arraigned him before Justice Mojisola Olatoregun, who ordered that he be remanded in the custody of the Commission pending the hearing of his bail application.
According to the EFCC, Fayose received ₦1.2 billion to fund his 2014 gubernatorial campaign in Ekiti State, a sum they said he ought to have known formed part of the proceeds of an unlawful act.

He pleaded not guilty to the charges.

Fayose ended his tenure as governor of Ekiti on October 15, and surrendered to the EFCC on Tuesday, October 16, as he had promised to do in a letter to the Commission while still in office.