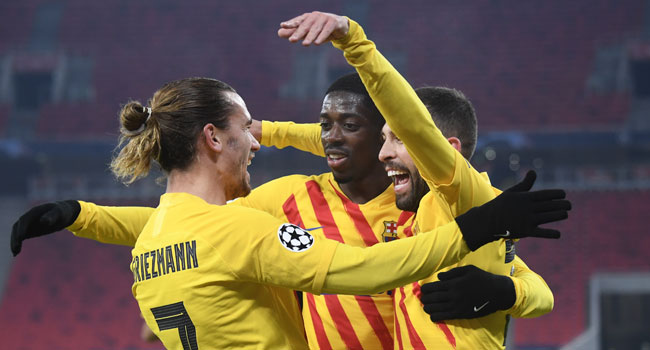 Ronald Koeman again rested Lionel Messi with qualification for the last 16 already assured, and Barca made it five wins from five in Group G with an impressive performance in Budapest.

France striker Griezmann has struggled to find his best form since joining from Atletico Madrid almost 18 months ago, but the 29-year-old appears belatedly to be hitting his stride under Koeman.

While Barca lag 10 points off the pace in Spain, albeit with games in hand, the Catalans can complete a perfect group-stage campaign for the first time since 2002-03 with victory at home to Juventus next week.

They will finish top of the section if they avoid defeat.

“We played well. We’ve won five matches out of five, playing some good football and scoring quite a few goals. I hope we can continue this run in the league,” Koeman told Movistar.

“We saw that we have a very good team. We were able to rest several players, but those who played showed we have the expertise.”

Griezmann’s clever back-heel flick from a Jordi Alba cross set the visitors on their way 14 minutes into a freezing night at the Puskas Arena.

Martin Braithwaite soon poked in a second from a similar position following an Ousmane Dembele assist, capping a 33-pass move with his fourth goal in three games.