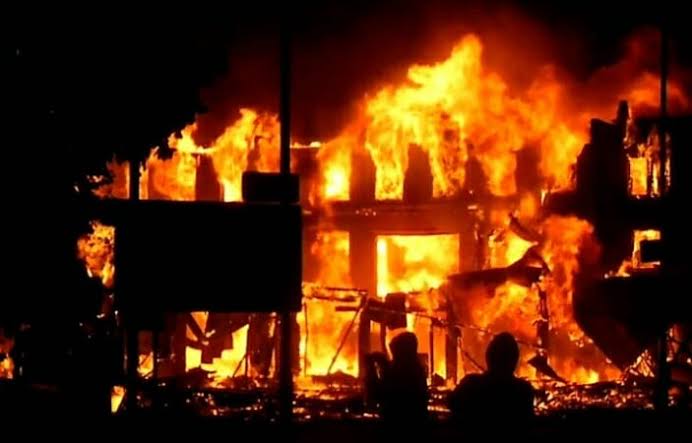 The Palace of Aree of Iree in Boripe North Local Council Development Area of Osun, was on Thursday evening vandalised and set on fire by angry youths in the town.

The palace was said to have been burnt by youths who were not pleased about the arrest of the Aogun of Iree, Chief Soliu Atoyebi, by security agents on Thursday morning.

It was attacked and burnt around 7.00 p.m, when the traditional ruler, Oba Ponle Ademola, was said to be out of the palace.

The incident led to the blockage of major roads leading to the town, while the aggrieved youths made burn fires on the roads.

Business owners in the town were said to immediately locked up their shops, while residents too locked up themselves for safety measures.

The Osun Police Spokesperson, SP Yemisi Opalola, was not available for comments, as her phone was switched off.

Gov. Ademola Adeleke of Osun, had on Monday a day after his inauguration, issued an Executive Order, setting aside the appointment and enthronement of three traditional rulers, Aare of Iree; Akirun of Ikirun and Owa of Igbajo.

Adeleke also directed that the palaces of the three traditional rulers should be locked up, while security agents should take charge of the palaces to the prevent breakdown of law and order.

There had been palpable fear in Iree Town following the appointment and approval of Prince Ponle Ademola as the Aree of Iree by the immediate past administration of Gboyega Oyetola.

Some ruling houses and groups in the town had rejected the selection of Ademola, alleging that he was imposed on the people by officials in the Oyetola’s administration. (NAN)