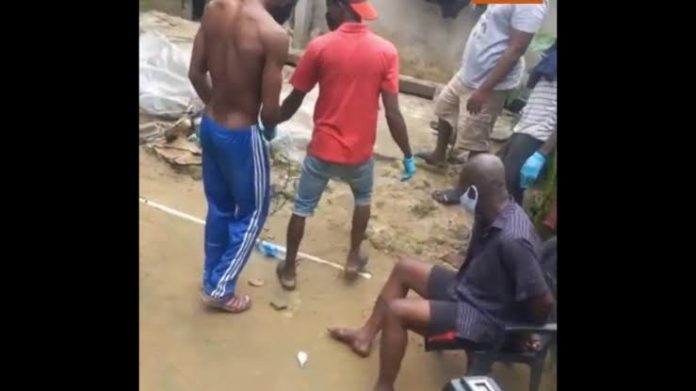 A man, whose identify was not disclosed, has been arrested by the police in Port Harcourt, Rivers State following the discovery of 20 corpses in his soakaway.

Similar to the notorious Otokoto saga which happened in Owerri, Imo State years ago, this latest one happened at Jesus Avenue, Ogunabani Road in Eche LGA of Rivers State.

In viral video making the rounds in the social media the suspect is seen with his hands tied to his back as bodies are exhumed from his soakaway pit.

The story has it that the trader had been in the habit of inviting his customers to his house for payment each time he bought goods, from them.

The man who has a house of his own, well fenced and secured apparently ended up killing his victims and dumping their bodies into the soakaway located in his compound.

According to accounts, he had allegedly been doing this since 2016 making a lot of money in the process.

As in the Otokoto saga his day of reckoning came and over 20 corpses were found in his 20-feet deep soakaway pit.

His end started when a trader in Aba travelled to Port Harcourt for his money but fortunately dropped the address and phone number of his customer, whom he was visiting in Port Harcourt with his wife.

When the wife waited for two days without any sign of husband, she alerted the police who after investigation tracked him down and arrested him. (Sunday Telegraph)