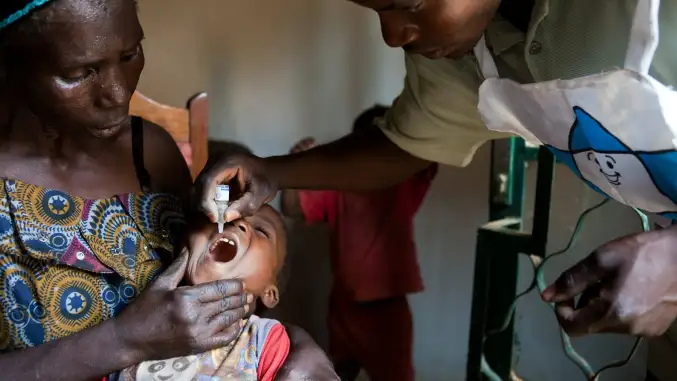 No fewer than 100 million African children have been vaccinated against polio in the past one year, the World Health Organisation (WHO) has said.

WHO Regional Director for Africa, Dr Matshidiso Moeti said that although COVID-19 had threatened the success of polio vaccination, it was possible to overcome the final hurdles.

Moeti, in a statement, stated that WHO had the know-how, but needed to be backed by committed resources to reach all under-vaccinated communities.

The polio programme has a history of supporting the response to emerging health threats in the region, including Ebola and COVID-19, and half of polio surge staff are currently helping countries with COVID-19 surveillance, contact tracing and community engagement.

According to WHO, African states overseen by the African Regional Office of WHO remained committed to ending all remaining forms of polio.

The Regional Office has also presented a scorecard to track progress towards the eradication of the virus as the Africa was certified free of wild poliovirus one year ago, after four years without a case.

However, outbreaks of a vaccine-derived poliovirus (cVDPV) is spreading in African communities where too few children have received the polio vaccine.

cVDPV is a weakened strain of the virus that has changed over time and behaves more like the naturally occurring poliovirus.

Since 2018, 23 African countries have experienced outbreaks and more than half of the 1071 global cVDPV cases were recorded in Africa.

According to WHO, cases increased in 2020 partly because of disruptions to polio vaccination campaigns caused by the outbreak of COVID-19 pandemic.

Meanwhile, WHO has said that the next three months will be a critical period for stepping up global collective action against future pandemics, citing three major meetings on the international agenda.

WHO is progressing with plans to strengthen global defense against future epidemics and pandemics, he said, pointing at the UN General Assembly in September, followed by the G20 Summit in October, and a special session of WHO’s governing body set for November.

The next three months, therefore, represent “a critical period for shaping the future of pandemic preparedness and response”, he added

WHO said that the commitments came at the just concluded virtual 71st meeting of the WHO Regional Committee for Africa.

Although the COVID-19 caseload stabilised last week, after nearly two months of increases, the level remains high, according to WHO Director-General, Dr Tedros Ghebreysus.

Ghebreysus said at a news briefing that COVID-19 cases had surpassed 4.5 million globally, with 68,000 deaths.

“Some regions and countries continue to see steep increases in cases and deaths, while others are declining,” he reported. “As long as this virus is circulating anywhere, it’s a threat everywhere”, the UN correspondent of the News Agency of Nigeria (NAN) quoted him as saying. (NAN)