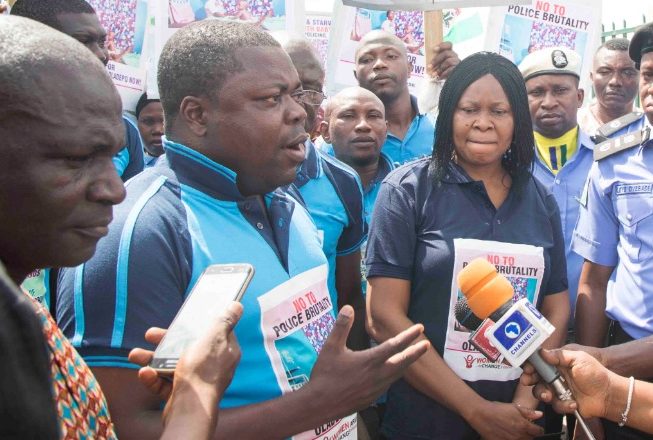 The Women Arise for Change Initiative has protested against the illegal detention of a nursing mother, Mrs. Rofiat Oladepo and her nine months son by the Zone 11 of the Nigeria Police Force.

The protest, which took place in Osogbo, Osun State on Tuesday was led by the President of Women Arise and the winner of the American Government’s Award of International Woman of Courage, Joe Okei-Odumakin had over 200 women and men.

The protesters defied the scorching sun to express their displeasure over the illegal detention of Mrs. Oladepo and her son, a nine- month-old- baby who were arrested and kept in custody of the Nigeria Police at the Zone 11 Headquarters in Osogbo in lieu of her husband.

The organization described the action of the police as a violation of the victims’ universally recognised fundamental human rights and the law of the land.

In her remarks while being received by the Assistant Inspector General of Police in charge of the Zone, AIG Leye Oyebade and his management team, Okei-Odumakin said, “We are pained and disappointed that the Nigeria Police held in custody a nursing mother and her baby, in lieu of her husband.

“Not only were they arrested and detained by proxy, they were also detained beyond the constitutionally sanctioned period. It is most nauseating to learn that Mrs Oladepo and her baby who were arrested on the 24th April, 2019 at Dural Toaheed, Oke Anu area of Ede and taken to Zone 11, Gbogan road, Oshogbo, were kept in inhuman conditions, only to be released later and given the sum of N500 (five hundred Naira) only as their transport fare back to Ede.”

Okei-Odumakin further informed AIG Oyebade that since their release from Police custody, Mrs. Oladepo and her baby have been hospitalised.

She therefore demanded that the officers and men of the Nigerian Police who conducted such unprofessional and illegal act be unmasked and brought to book while also requesting for the payment of medical bills being incurred by the victims at the hospital and immediate Public apology to Mrs. Oladepo and her son.

Responding to the demands of Women Arise President, AIG Oyebade appealed to the protesters to stay further action as he would carry out immediate investigation into the matter and ensure that justice was done forthwith.

“One of the hallmarks of our ethics is policing with the fear of God aside the general rule of policing with integrity,” he said.

According to him, such impunity would never be allowed to thrive under his purview and expressed the willingness of the Nigeria Police Force, under the incumbent leadership to collaborate with the civil society in promoting a people’s friendly Police Force.