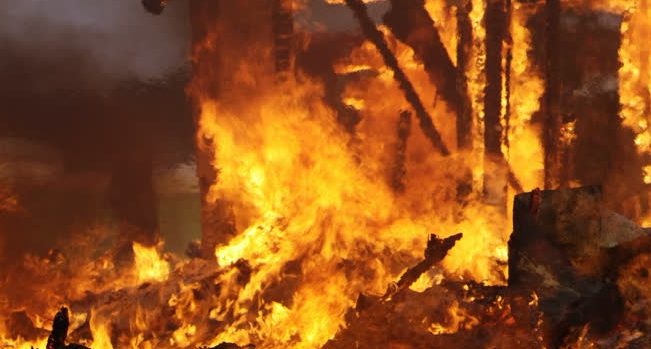 Tragedy struck in the riverine Biagbini community in Ese Odo Local Government Area of Ondo State on Saturday morning as a 70-year-old woman, Mrs. Moyo Jide and her four grandchildren were reportedly killed in a fire incident.

Two of the grandchildren were said to have been living with the grandmother since after the death of their father (Mrs. Moyo’s son) a few years ago.

The cause of the inferno has not been ascertained. However, The Punch quoted an eyewitness as saying the incident might have been caused by the cooking fire in the kitchen of the deceased. The eyewitness said properties in the house were also razed by the fire.

A resident of the community, who craved anonymity said the fire started around 12: 00 a.m. on Saturday when Mrs. Jide and her grandchildren were asleep.

He said, “Everybody in the community came awake in the middle of the night when the fire started but there was nothing we could do to rescue the victims. Everything in the house was destroyed.

“We are yet to know the cause of the fire but we suspect it could be cooking fire that was not properly put out in the kitchen that caused the inferno because we use firewood here and there is no electricity in the community.”

He added that the matter was immediately reported at the Arogbo Police Division while the corpses of the deceased had been deposited at a hospital.

When contacted, the Police Public Relations Officer of the state, Mr. Femi Joseph, confirmed the incident and said investigation had begun.

“We are yet to ascertain the cause of the fire incident but we have commenced our investigation into it,” the police spokesman stated.