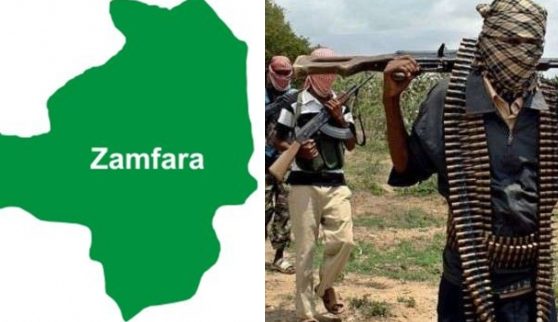 Vice-Chairman of Shinkafi Local Government Area of Zamfara State, Sani Galadima, on Monday disclosed that they pay ransom to bandits on a daily basis, even as he said six members of the Civilian Joint Task Force in the area were killed on Sunday by the hoodlums.

He made the disclosure while receiving the Interior Minister, Gen. Abdurrahman Dambazau, who visited the state to assess the security threat being posed by banditry as well as listen to other challenges of the people.

Galadima also told the minister that at least 98 communities in Shinkafi LGA had been deserted due to the activities of bandits in the state.

He said: “Six members of the Civilian JTF were attacked and killed on Sunday by the bandits after receiving their pay from Shinkafi town and were on their way back to their villages.

“Even yesterday (Sunday), these bandits sent a letter to the district head of Shinkafi town (saying) that they were coming to attack the town.

“This ugly situation is very disheartening; every day we pay millions of naira in ransom to these bandits. We really need government’s urgent support to end this problem.

“Our women also suffer a lot (because) the bandits attack communities and abduct ladies from their parents’ homes. People no longer sleep with their two eyes closed in the night in Shinkafi LGA.

“We want the government to resolve the issue of shortage of troops and police. We only have 19 soldiers in this town.

“We need urgent intervention from the government; we are not satisfied with the efforts and strategies of the security agencies.

“We all know the camps where these bandits stay; even the security men are aware of these camps; our major concern is that security personnel are not getting to these bandits.We are hoping that with this visit, this problem will come to an end.”

Speaking Dambazau said, “This is not my first visit to Zamfara; we started this process to ensure lasting solutions to these problems, not only in Zamfara State.

“President Buhari asked me to visit Shinkafi and Anka emirates in Zamfara to carry out the assessment and discuss these issues. The President also expresses his condolence over loss of lives and destruction of properties as a result of insecurity.

“It is the responsibility of government to ensure lives and properties are secure. That is why we must do everything possible to ensure the end of this situation.

“We commenced this process by meeting with the leaders of Miyetti Allah; we are going to consult with traditional rulers and governors of the most affected states.”

The Emir of Anka and Chairman of Zamfara State Council of Chiefs, Attahiru Ahmad, who hosted the minister at his palace, said over 13,000 people had abandoned their villages and relocated to the towns while some have left the state due to the activities of bandits.

He also lamented that farming in the area had been adversely affected by the attacks from the bandits and pleaded with the federal government for urgent action to save them from the bandits.

The minister had gone on a condolence visit to the Emir’s palace over the killings in Anka.

He said: “We are happy that the Minister of Interior has come here to see us and to condole with us over the tragedy we are experiencing. Now that you are here, our hope of getting rid of these criminals has been rekindled.

“We have witnessed a lot of killings and abductions of our people. As I am talking to you now, we have more than 13,000 people who have left their villages and relocated here (to Anka town). There are many others at different towns and villages. Some of them have even left the state.

“So, the issue of farming is not possible because the people have deserted their villages and unless Federal Government does something urgent and in time, many people would not have the chance to farm.”

The minister, who warned the bandits in the state to either surrender immediately or be killed assured the people that the Federal Government would soon end the killings and kidnappings in the state.

He said the Federal Government had made adequate arrangements on how best to tackle banditry and other insecurity issues affecting the state.