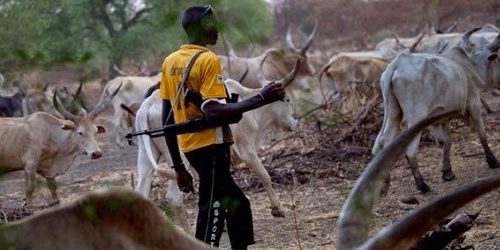 Following reported cases of attacks launched by herdsmen in Aba, the Abia State commercial nerve centre, the Ohanaeze Ndigbo Youth Council has issued an order to all armed cattle rearers destroying property and killing people in the South East to vacate immediately.

The OYC’s call was contained in release made available to newsmen in Umuahia on Monday, signed by its President General, Mazi Okechukwu Isiguzoro.

The statement said the pan-Igbo youth body would no longer condone a repeat of the ugly incident that took place in Aba, Abia State.

“Ohanaeze Ndigbo Youth Council Worldwide is wading into the crisis trying to escalate now in Aba, as a young lady named Miss Esther Nmecha, had her hand chopped off by the armed herdsmen. Biafra agitators are threatening reprisal attack on the Northern settlement in Aba and Port Harcourt,” it added.

The pan-Igbo youth group then called for calm, and asked the Federal and Abia State governments to settle the medical bills of Miss Nmecha, who had been in Aba General Hospital, as a way to forestall any form of reprisal attack on the Northern settlement in Aba and Port Harcourt, “or else we may not guarantee the outcome of imminent mayhem that will result from these actions of armed herdsmen in Aba.”

On the spate of killings in the North East and North West geopolitical zones, the OYC expressed worry over the spate of violence and banditry across the North, especially Zamfara State.

According to the OYC, intelligent report available to it had revealed that most of the traditional rulers had been fighting over who would control the illegal gold mining activities in the North, and had stockpiled arms to execute their selfish agenda against the Federal Government.