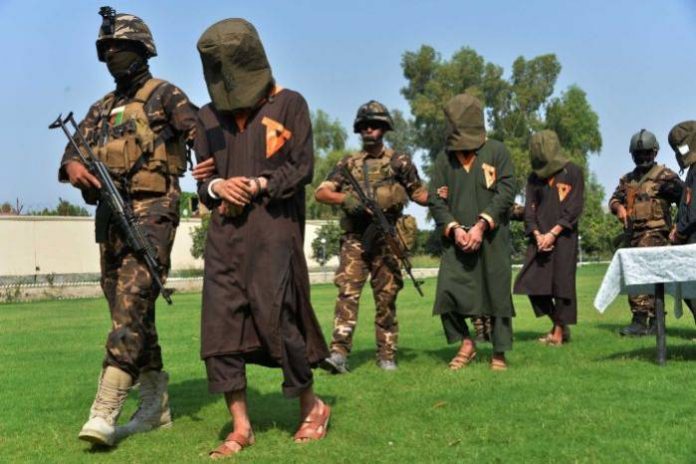 American Kevin King and Australian Timothy Weeks were released three years after being kidnapped outside the American University of Afghanistan in Kabul where they worked as professors.

The three militants arrived in Qatar from Afghanistan as part of the swap.

Afghan officials say the deal is aimed at restarting talks with the Taliban.

President Ashraf Ghani said last week the decision was “a tough, but important” one and a “humanitarian gesture”.

The swap includes Anas Haqqani, a leading figure and fund-raiser in the Haqqani militant group, and two other senior commanders, who had been held in prison by Afghan authorities.

Anas Haqqani’s older brother, Sirajuddin, leads the Haqqani network of fighters and is a deputy leader of the Taliban, which has a political office in Qatar.

It is unclear if they have been handed over yet to the Taliban.

The fate of 10 Afghan soldiers who the Taliban are reportedly to free as part of the deal is unclear, the New York Times reported.

The two professors of English were ambushed by gunmen and taken from a vehicle while leaving their university campus in Kabul in August 2016.

US Navy Seals attempted a rescue mission several days later but Mr. Weeks, originally from Wagga Wagga in Australia, and Mr. King, from Pennsylvania, had been moved on just hours before.

The pair then appeared in a video, released in January 2017, appealing to then US President-elect Donald Trump to agree to a deal to secure their release.

On Tuesday, a Taliban source in southern Afghanistan told the BBC the pair had been handed over in the Nawbahar district of Zabul province at 10:00 local time (05:30 GMT).

According to a local police officer, who was involved in the swap, a 48-hour ceasefire was observed before the swap. The men were then flown away in a US helicopter.

The condition of the two men remains unclear, but in his speech last week Mr. Ghani noted “their health has been deteriorating while in the custody of the terrorists”.

The American University of Afghanistan said in a statement that it “shares the relief of the families of Kevin and Timothy, and we look forward to providing all the support we can” to the two men and their families.