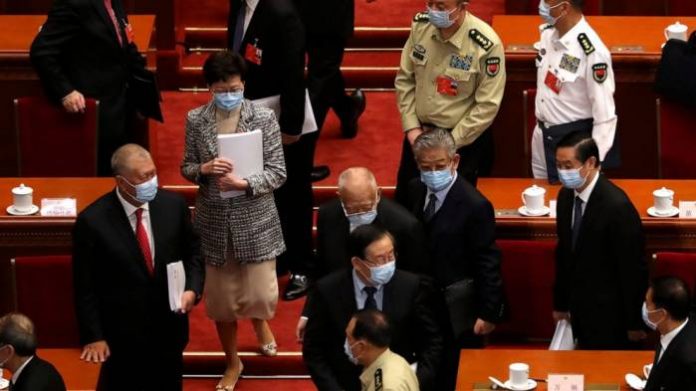 The U.S. and Britain have issued warnings to China about proposed national security laws that critics are blasting as Beijing’s attempt to crack down on freedoms in semi-autonomous Hong Kong.

He warned that “any decision impinging on Hong Kong’s autonomy and freedoms” could lead to the U.S. changing its position on China’s so-called “One Country, Two Systems” principle – the 1997 understanding implemented when Britain handed control of the city to China.

The new national security legislation – which targets what Beijing calls secessionist and subversive activity, foreign interference and terrorism – risks reigniting the unrest that has quieted since the novel coronavirus outbreak.

The bill stipulates that the Standing Committee of the National People’s Congress in Beijing would have the authority to set up outposts of mainland agencies “if needed” in order to curb violent protests in Hong Kong and interference by “foreign forces.”

Many in Hong Kong, where people enjoy a degree of freedom not seen on the mainland, fear the law will be used to quash political dissent.

“As a party to the joint declaration, the UK is committed to upholding Hong Kong’s autonomy and respecting the one country, two systems model,” the spokesperson said.

However, he provided no specifics when asked if the new Chinese proposals breach the 1997 understanding.

Speaking at a news conference on Friday night, Lam said the move was necessary, citing the need to protect against “external or foreign forces.”

Lam sought to assure the public that the “legitimate rights and freedoms enjoyed by Hong Kong residents” would continue and judicial independence would not be compromised.

Massive protests, sometimes millions-strong, roiled the city for months last year due to a proposed bill that would have allowed suspects to be extradited to China, subjecting Hong Kong residents to the mainland’s opaque legal system.

The bill was eventually scrapped.

Rights group Amnesty International said the move “poses a quasi-existential threat to the rule of law in Hong Kong and is an ominous moment for human rights in the city.”

Pro-democracy lawmakers staged a protest during a legislative council meeting on Friday to oppose the law.

At least four pro-democracy council members were removed by security before the meeting was suspended.

He said the law was needed because Hong Kong’s own ability to enact national security measures has been met with “sabotage and obstruction by those trying to sow trouble in Hong Kong and China at large, as well as external hostile forces,” according to Xinhua news agency.

“They are challenging the world, asking: Are you going to do something for Hong Kong?” he said.

Strong criticism emanated from Taiwan, which has had its own government separate from Beijing since 1949, even though China does not recognise it as independent.

“Strict control and suppression will win no recognition from the people,” Ting Yi-ming, spokesman for the Taiwan government’s executive branch, said in a statement on Friday.

The online protest community has called for a march on Sunday to voice opposition to the bill, despite social-distancing laws that prohibit more than eight people from gathering in a public place.