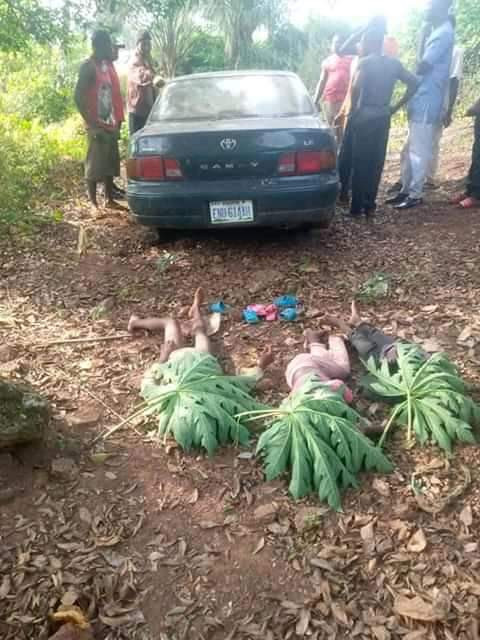 The bodies of three children were found in a car parked at the home of a retired police officer at Ugwu Ogede in Itchi, Igbo-Eze South local government area of Enugu State on Tuesday.

The victims, identified as Chibugo Eze, Chinenye Eze, and Ebuka Ene, were reported missing after they went to fetch water at a commercial borehole owned and located at the home of a former police officer.

It was gathered that two other children, named Kingsley Eze, and Mmasichukwu were equally rescued from the same car.

Upon resuscitation, they claimed that three hooded men abducted and left them in the car. The hoodlums reportedly returned in the middle of the night to take them away but they couldn’t open the car doors, which were faulty, so they abandoned the kids and ran away.

Parents of the children had raised a search team when the five kids who had gone to the borehole around 8:00a.m on Sunday did not return home. Traditional ruler of the community, Igwe Ike Oke, said he mobilised personnel of vigilante and Forest Guard groups, who joined in the search of the missing children.

“We were almost frustrated in our search when someone who went to fetch water heard the voice of a little child calling her name. She traced the voice to a car that had been parked for over six months in the compound where she discovered the children,” the monarch said.

Efforts to get reactions of the police in Enugu on the story proved abortive as the Police Public Relations Officer, Daniel Ndukwe, did not pick his calls.