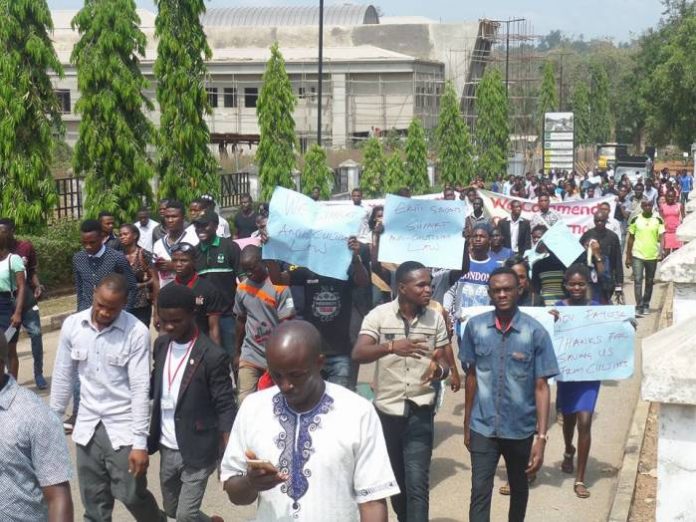 Students of tertiary institutions in Ekiti State, held a peaceful protest against cultism in Ado-Ekiti on Monday.

The protest was held under the umbrella of the National Association of Nigerian Students/Joint Campus Committee (NANS/JCC).

Students of the Ekiti State University, Federal University, Oye-Ekiti, the Federal Polytechnic, Ado-Ekiti and those other affiliated schools in attendance.

Dubbed “Walk Against Cultism’’, the protest started at the popular Old Garage in Ado-Ekiti through  Okeyinmi Area to Fajuyi Park, where the Chairman of NANS/JCC, Ekiti Axis,  Mr Felix Olanrewaju, addressed the students.

Olanrewaju expressed regret at the carnage unleashed on some campuses by murderous cult groups, especially the gruesome murder of six youths in Ikere- Ekiti, on Sunday, April 18 during a cult clash.

The chairman said that NANS was battle-ready to stop the shedding of innocent blood on campuses and to restore sanity into the system.

“Joining cultists seems to be a good option for some Nigerian Students, but any student whose mind-set is configured to achieving goals will shun that path,’’ Olanrewaju said.

He added that cultism had never been a good choice and that it added no value to life but rather reduced the cultists’ quality of life.

The chairman stressed that one of the major disasters that should be avoided in a student’s life is cultism.

“The consequences of cultism include threat to peace on campuses and society, sexual harassment like rape and all sorts of sexual crimes, incessant killings, drug abuse, kidnapping and all sorts of violence.

“We are informing our parents to advise their children and we are giving students adequate information needed to desist from this ungodly groups that can truncate their lives at the prime,’’ he said.

“Today, NANS/JCC walks against the shedding of blood, brutal killings, sexual harassment and all sorts of violence,’’ Olarewaju added.

In his remarks, General Secretary in the axis, Mr. Sikiru Aderibigbe, said the peaceful protest was part of NANS’ mandate to adding value to the lives of Ekiti students and to those of campuses.

“We invite all Nigerian students in Ekiti State to join NANS to tackle and defeat cultism. Together we shall put an end to cultists’ brutality,’’ the secretary said. (NAN)