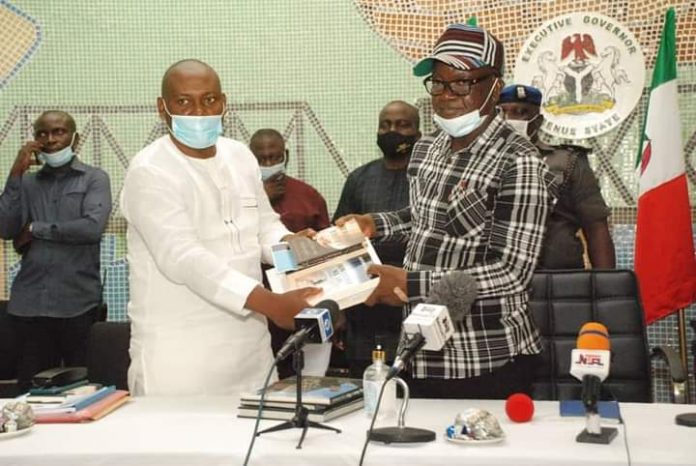 Nobel Laureate, Professor Wole Soyinka has donated 107 different books to Children living in Internally Displaced People (IDP) camps in Benue state.
The books were presented to Governor Samuel Ortom at the Benue Peoples House Makurdi, for onward distribution to children in Internally Displaced Persons, camps.
Soyinka who noted that the presentation will be in series, said it is in fulfilment of his promise to donate books to displaced children of school age to encourage teaching and learning.
Presenting the books through the immediate past state chairman of the Association of Nigerian Authors, (ANA), Mr. Charles Iornumbe, Soyinka said the donation would be continuous as its scope would be widened through his contacts.
He appreciated Governor Ortom’s approval of land for Writers Village in Makurdi at his request and expressed hope that the allocation process would be completed speedily for ANA Benue to take possession.
Receiving the books, Governor Samuel Ortom appreciated Professor Wole Soyinka for his gifts to better the education of the Benue child.
He said Soyinka is a father and great Nigerian who stood with Benue in her trying times particularly taking the pains to travel to Benue to pay solidarity.
READ ALSO: Wole Soyinka Centre for Investigative Journalism Awards (Photos)
Ortom said even after the heightened incidence of herders attacks, Professor Soyinka visited again to encourage people of the state saying the books would be distributed to the camps for use by the IDPs.
He stated that Benue would continue to pray God to grant the Nobel Laureate long life and prosperity so that he would continue to do the good works he is doing for Benue and Nigeria at large.