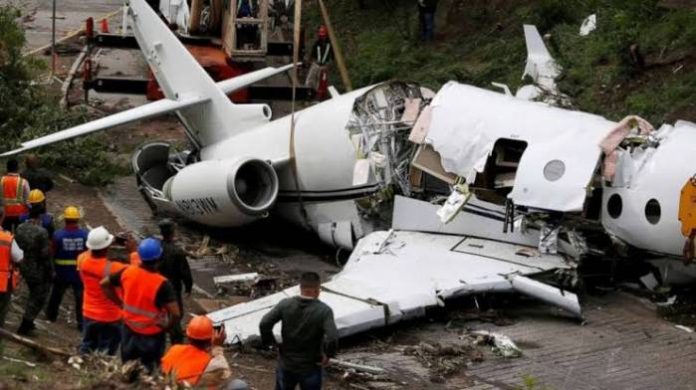 Six people including two American missionaries were killed when a private airplane crashed southwest of Haiti’s capital Port-au-Prince, local authorities said Saturday.
The aircraft had taken off from the city’s airport at 6:57 pm (2257 GMT) on Friday and should have arrived at Jacmel, on Haiti’s southern coast, around an hour later, according to the National Civil Aviation Office (NCAO).

The plane crashed en route with six people on board,” an NCAO incident report said.

Gutenberg Destin, the coordinator of civil protection for Haiti’s Ouest Department, confirmed to AFP that all six people on board had perished.

The cause of the crash wasn’t immediately clear.

The US-based missionary organization Gospel to Haiti said on its Facebook page that Americans Trent Hostelter, 35, and John Miller, 43, were among the victims.

They were part of a larger group making the trip in two planes, with Hostelter’s wife and children on the first flight.

READ ALSO: How We Got Powers After Killing 10 Girls For Rituals – ESN Commander

“When the second plane didn’t show up, they were very concerned and soon heard that the plane had gone down somewhere near Leogane,” Gospel to Haiti said.

A search team was formed and sent out and they located the plane early this morning and confirmed that all six people were killed, including Trent and John.”

Hostetler and his wife worked for the missionary organization, while Miller was volunteering for a short period, according to GoFundMe pages opened to support of their families.

With heavily armed gangs controlling the main land route from Port-au-Prince to the southern half of Haiti, charter flights to Jacmel have become increasingly popular — among the tiny number of Haitians able to afford them.