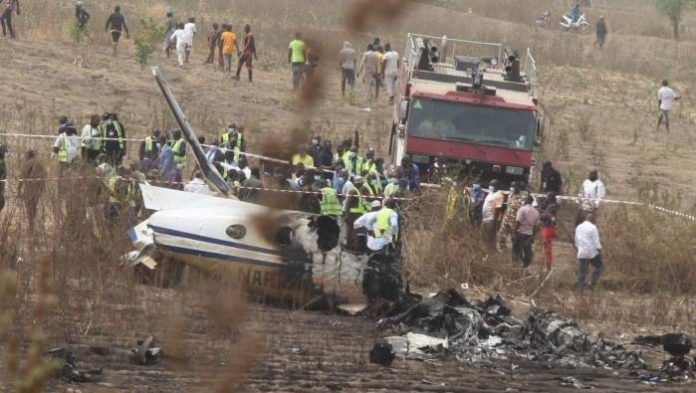 Lamenting the tragedy, President Muhammadu Buhari said he remained committed to the safety of the Nigerian airspace.
The aircraft, which was en route Minna, Niger State capital, crashed shortly after the perimeter fence of the Nnamdi Azikiwe International Airport, Abuja.

Firemen attached to the Federal Airports Authority of Nigeria (FAAN) put out the fire in the after noon while officials of the National Emergency Management Agency (NEMA) and the Federal Road Safety Commission (FRSC) were on ground.

About 1:30p.m., a team of investigators arrived at the scene from the Accident Investigation Bureau of Nigerian (AIB-N).

Working with the Air force personnel, the investigators immediately mapped out the accident scene, examining and identifying body parts of the aircraft, which laid strewn around the crash site.

About 2p.m, all emergency rescue teams had completed their task and were ordered to leave the scene for investigators.

An eyewitness said the aircraft struggled for balance and began descending dangerously until it hit a mango tree close to a stream behind Bassa village close to the airport.

The pilot of the aircraft had reportedly complained of engine failure barely moments after taking off. A source at the control tower, who spoke to reporters on condition of anonymity, said the pilot was advised to return to the Abuja airport immediately but it crash-landed.

The source said: “There have been frequent flights to Niger State since the abduction of the school kids. Last week, some ministers also flew. Soon, we will know their identities,” he said.

He said: “A military aircraft King Air 350 has just crashed short of our Abuja runway after reporting engine failure en route Minna. It appears to be fatal. We should remain calm and wait for the outcome of investigation by the military, while we pray for the departed soul/souls if any.”

GIVING more details late evening, NAF said the Beechcraft KingAir B350i (NAF 201), was on its way to Niger State in in connection with the concerted efforts to secure the release of the students/staff abducted from the Government Science College Kagara, Niger State.

Director of Public Relations and Information, Air Vice Marshal Ibikunle Daramola, who this in Abuja, said the Chief of the Air Staff (CAS), Air Vice Marshal Oladayo Amao, had instituted an investigative panel to determine the remote and immediate causes of the accident.

“The aircraft which was en route Minna, Niger State capital reported engine failure at time 10.39UTC and crash-landed on the final approach path of Abuja runway 22 at time 10.48UTC.

Also, the spokesperson for Federal Airport Authority of Nigerian (FAAN), Herrienta Yakubu, had confirmed the accident, but said the details were still sketchy because it involved military aircraft.

An eyewitness said: “I was there when it crashed close to aviation village called Bassa; the pilot did a great job by ensuring that it was not close to any of the structures.”

“I saw it while the plan was struggling but there was no way to help rather than praying for them.” Following the crash, President Muhammadu Buhari assured the nation that safety of the Nigerian airspace would remain a key priority of his administration.

IN his reaction, President Buhari also condoled with family members, friends and colleagues of the victims.   In a statement signed by his Special Adviser on Media and Publicity, Femi Adesina, the President noted that while investigations were ongoing, the safety of the Nigerian airspace would remain key priority of the government.

The Beechcraft King Aircraft is a line of American utility aircraft produced by Beechcraft. King Air was the first aircraft in its class and has been in continuous production since 1964.

In August 2014, three new Beechcraft King Air 350i aircraft were delivered to the NAF and were being operated by the NAF’s 209 Executive Airlift Group (EAG), Minna, Niger State capital.

MILITARY air disasters have been relatively frequent in Nigeria over the past two decades. However, Nigeria has a Category 1 rating under the US Federal Aviation Administration’s (FAA) International Aviation Safety Assessment programme, meaning the country complies with globally accepted safety standards.

Recall that September 7, 1992, 158 people were killed when a military transport plane went down at Ejigbo, Lagos; on September 18, 2006, a Dornier 228 military plane crashed at Vandekiya, Benue State, killing 14 military officers, including 10 Generals.

And on September 28, 2018, two NAF fighter jets crashed in Jikoko village, Abuja, near a quarry site owned by Limfond.