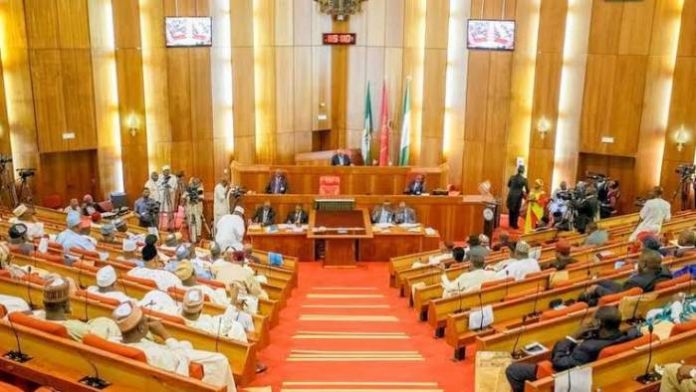 The Senate has urged the Federal Government to prioritise the rehabilitation and concession agreement for the Eastern rail line.

This, according to the upper chamber, was in recognition of its huge revenue potentials to the national economy and for movement of people to reduce the burden on dilapidated roads in the axis.

The resolution was sequel to a motion on “Urgent Need to resuscitate and Re-activate the Rehabilitation and Concession of the Eastern Rail line Project.”

The motion was sponsored by Sen. Orji Uzor Kalu (APC-Abia) and co-sponsored by 101 senators during plenary.

The upper chamber also mandated its Committee on Land Transport to interface with the relevant ministry and agencies of the Executive to facilitate the commencement of the Eastern corridor.

It also mandated its Committee on Compliance to ensure compliance and report back to the Senate in three weeks for further legislative action.

Moving the motion, Kalu said that one of the greatest challenges facing the nation as an emerging economy was poor infrastructural development.

“Specifically, the movement of goods and persons from one point to another is becoming very cumbersome, if not hazardous,” he said.

The lawmaker further noted that the Federal Government in recognition of the fact that there was dire need for transformation of the Nigerian Railway system into a more dynamic and functional one, encouraged the use of rail to reduce road traffic congestion problems.

“The Federal Government in 2017 entered into an agreement with General Electric, a Boston, United States based company, under the Rehabilitation and Concession of Western and Eastern Railway lines to connect Abia, Rivers, Lagos, Oyo, Ogun, Kwara, Kaduna, Katsina, Enugu, Bauchi, Gombe, Plateau, Borno,Yobe and Kano.

He further said that in spite of the fact that the railways were more efficient in haulage of bulk loads over long distances in environmental and economic ease including cargoes and petroleum products, the sector suffered neglect especially the Eastern rail line.

“In spite of being the most lucrative route in Nigeria and a distance of about 1, 402 km having passed through Aba in Abia, the commercial nerve center of the South East is regrettably left in a comatose condition.

“This has resulted in Nigerian Railway Corporation (NRC), losing at least N10. 4 billion each year since 2014 totaling N63.2 billion in the past six years.

“In spite this colossal loss of revenue in this corridor and the attendant economic benefits that would be accrued, the commencement of the rehabilitation and concession of the Eastern Rail lines as entered by the Executive has not taken off like that of the Western corridor with two to three different companies.

“The Federal Executive Council is yet to give approval for the commencement which leaves not just the government as losers, but all host communities to the rail line from Port Harcourt to Maiduguri,” Kalu added.

“Abia, South-East is not on its own without the others parts of this nation and what that means, Mr President is that once this rail passes through Abia, it will not be used only by the Igbos or the South-East; it is for the entire Nigeria,” Okorocha said.

Similarly, Deputy Senate Leader, Ajayi Boroffice said that the development of the Eastern Corridor would solve so many problems including easing the problems of transportation.

He said that the project, if carried out by the government would reduce the incident of accidents on roads.

“The incidence of accidents in the eastern part of the country is so dangerous, this axis of rail system is going to reduce the incident of accidents on the roads.

“Movements of goods and services by rail will also reduce the incidents of armed robbery,” he said.

The prayers of the motion were unanimously adopted by the senators after a voice vote by the President of the Senate, Ahmad Lawan. (NAN)