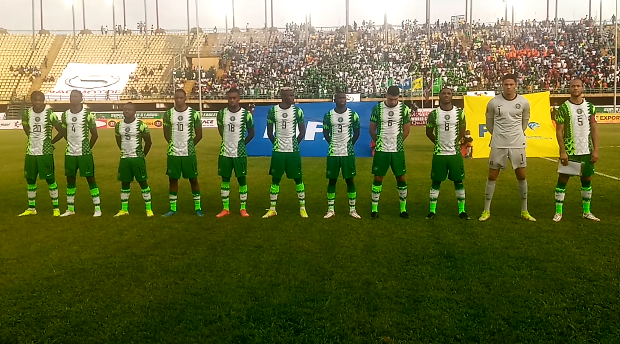 The Super Eagles secured a hard-fought 1-1 draw with Cape Verde on Tuesday in Lagos to reach the final round of African qualifiers for the 2022 World Cup finals.

The News Agency of Nigeria (NAN) reports that in the match played at the Teslim Balogun Stadium, the Super Eagles could only settle for a draw against the more-determined Blue Sharks.

The Eagles scored in the opening minute through Victor Osimhen, after he utilised a cross from Moses Simon.

The Eagles were pegged back about five minutes later from a Mendes Stipora goal, after he headed in from a corner-kick.

The Eagles thereafter failed to hit the back of the net in spite of intense pressure, with Odion Ighalo failing to connect a pass from Osimhen in the 30th minute.

The second stanza of the high intensity game was, however, more nervy for the Nigerian team as the visitors became more daring with a good string of passes in the Eagles’ half.

Both teams made substitutions in an attempt to change the course of the game, with Shehu Abdulahi coming in for the injured Moses Simon.

Speaking on the sidelines of the match Super Eagles’ head coach Gernot Rohr disclosed that the team had to settle for a draw in view of the technicality of the game.

“Sometimes a draw night be an escape because we want to qualify and we know that a draw will do that.

“It was not an easy game because the Cape Verde team has a very good technical team. They secured their goal at a moment when we believed we had the match in our hands.

“But we missed lots of chances, especially in the first half, and we deserved to score a second goal. But as it was not coming, we had to defend,” he said.

On the inclusion of Ighalo in the team, Rohr said the decision was to allow him to have an impact on the forwards in view of his wealth of experience.

“We need a lot of patience with Ighalo. He has not been with the team in about a year, so he needs time to find the complexity and the harmony in the team.

“We saw an interesting thing in the match with Ighalo’s patnership with Osimhen, as he needs to learn from him.

“The chance to score our goal came in through Ighalo,” he said.

On how to plug the loopholes in the team, Rohr said that the Eagles needed to play more quickly, especially from the defence.

“The improvement I want to see in the team is using the opportunity we have to score and to be more offensive.

“But, as it is now, we have finished with 13 points from six matches. It is not the best result, but we have two more points than the second-placed team.

“After this group stage, we are optimistic now that we have more time to prepare. Some of our players are just coming out from injuries,” he said.

On his part, the coach of the Blue Sharks, Pedro Brito, commended the efforts of the Eagles and also tipped them to qualify for the World Cup, given the availability of experienced players.

In the other match in Group C, Liberia beat Central African Republic (CAR) 3-1.