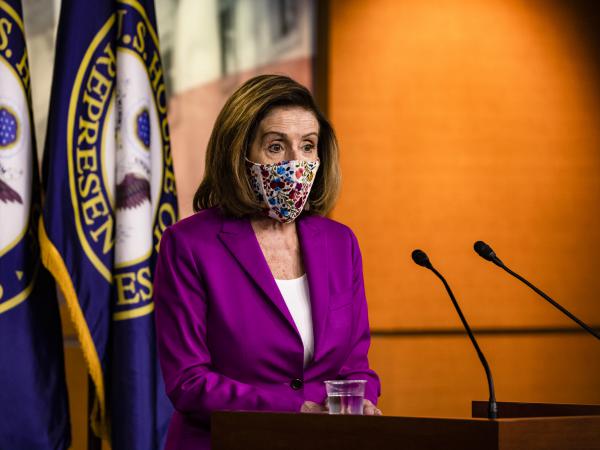 “If the vice president and Cabinet do not act, the Congress may be prepared to move forward with impeachment,” Pelosi told a news conference.

Trump was impeached in 2019, but the Senate cleared him of charges last year.

Chao, who is the wife of Senate Republican leader Mitch McConnell, said the “traumatic and entirely avoidable event” had “deeply troubled” her.

Trump has not denounced the violence, in spite of pleas from top officials, including acting U.S. Homeland Security Secretary Chad Wolf.

The long-time Trump ally implored the president to “strongly condemn” the “tragic and sickening” events.

Earlier on Thursday, Trump promised an “orderly” transfer of power.

“Even though I totally disagree with the outcome of the election, and the facts bear me out, nevertheless there will be an orderly transition on Jan. 20,” he said in a statement as he continued to promote debunked claims of voter fraud.

He added: “While this represents the end of the greatest first term in presidential history, it’s only the beginning of our fight to Make America Great Again!”

It was Trump’s first acknowledgement of his defeat in the November election.

“The message was issued via his social media director Dan Scavino, as the president’s personal Twitter account was locked, following comments he published that some say spurred Wednesday’s attack on the U.S. Capitol by his loyalists.

Fellow social media giant Facebook banned Trump from his accounts indefinitely, citing his intent to “undermine the peaceful and lawful transition of power.”

The joint session of Congress had been abruptly halted hours earlier after rioters breached both chambers of the Capitol building, forcing lawmakers to flee and hunker down until the siege ended.

One woman was shot and killed by Capitol police during the assault, the force said in a statement.

DC police updated the number of arrests they made, to 68 people.

Some participants in the violence at the U.S. Capitol will be charged on Thursday and authorities will make more arrests in the coming days, U.S. Acting Attorney General Jeffrey Rosen said.

The Justice Department would ensure that “those responsible for this attack on our government and the rule of law face the full consequences of their actions under the law,” he added.

Over the past 36 hours, the U.S. Attorney’s office, in conjunction with the Justice Department’s counter-terrorism division, has charged 40 cases, officials said.

The majority of those deal with unlawful entry on the Capitol grounds, while a small handful are assault cases.

Eight of the cases were also firearm cases.

One man was arrested by federal agents with a military semi-automatic rifle and 11 Molotov cocktails, according to officials at the Department of Justice.

A 2-metre-tall fence was erected around the U.S. Capitol on Thursday and would stay in place for the next 30 days, including for Biden’s inauguration on Jan. 20.

More National Guard troops from other states were deployed to Washington.

The FBI was seeking tips on identifying rioters.

Amid criticism about how security failures allowed the mob to swarm the building, House Speaker Pelosi said she was seeking the resignation of Capitol police chief Steven Sund.

Sund defended his force, which is dedicated to protecting the Capitol grounds, saying officers’ response was “heroic” in the face of “criminal riotous behaviour.”

They were attacked by the rioters with metal pipes and chemical irritants, he said.

After the House and Senate reconvened, McConnell condemned the ransacking of the Capitol as a “failed insurrection.”

Although several Republican senators who had planned to raise objections to the counting of votes in states won by Biden changed course after the attack, two challenges were still put forward.

The moves caused lengthy delays to the certification process, but both challenges were ultimately rejected.

Longtime Trump loyalists including McConnell and Pence rebuffed the president’s demands to block the certification of the election.

The violence around Congress was criticized by leaders around the world.

German Chancellor Angela Merkel also placed part of the blame on the outgoing Republican president, accusing him of fuelling doubts surrounding the electoral result and therefore paving the way for the angry mob. (dpa/NAN)