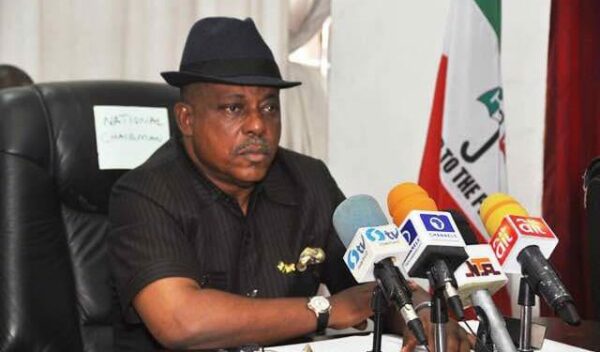 Prince Uche Secondus, embattled National Chairman of the Peoples Democratic Party (PDP), has complied with the court order to stay off the National Executive Committee (NEC) meeting of the opposition party.

A court in Calabar, Cross River State, had restrained Secondus from presiding over the NEC meeting of the party, which is ongoing.

Justice Edem Kufre gave the order based an application brought by a member of the party, Enang Wani.

There had been concerns that Secondus, who had insisted on being the party’s chairman despite being suspended by a Rivers High Court, would attend the meeting.

Two days after the Rivers High Court restrained him from office, a Kebbi High Court reinstated him as national chairman of the party.

Based on the order of the Kebbi court, Secondus stormed the PDP headquarters in Abuja on Friday, insisting that he was the authentic chairman of the party.

However, he was prevented from attending a stakeholders’ meeting presided over by Elder Yemi Akinwonmi, Deputy Chairman (South).

The PDP had named Akinwonmi acting chairman after the court suspended Secondus.

But on Friday, Secondus told journalists that he was still in charge of the party since another court had overturned his suspension.

However, on Saturday, Secondus wrote to Akinwonmi, asking him to take charge of the meeting.

“I hereby request you to preside over the National Executive Committee meeting of the Party, taking place today, 28th August, [email protected] 12 noon, in my absence. Thank you,” the letter read.

Top on the agenda of the NEC meeting is expected to be the National Convention already fixed for October 30.