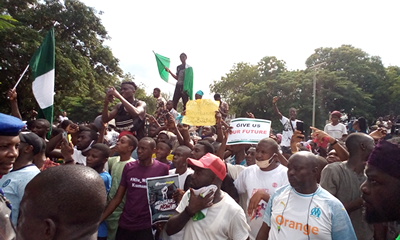 The Pan-Niger Delta Forum PANDEF, Monday, canvassed intervention of the African Union (AU) and the international community to end the #EndSARS protests across the country before things get out of hand.

PANDEF also condemned the brutalisation of Nigerian youth by hoodlums along with police officers across the country, particularly in Abuja and Benin City, Edo State.

It demanded an immediate end of the intimidation, harassment and physical assault of young Nigerians, who are protesting peacefully having been frustrated over the state of the nation.

PANDEF’s national chairman, Air Commodore Idongesit Nkanga (rtd.), said the call for intervention was based on the fact that if the Federal Government failed to handle issues surrounding the protests properly and continued in the present manner, it won’t augur well for the country in terms of the socio-economic and political consequences.

“We had expected President Muhammadu Buhari to address the youth in a fatherly manner to assuage their justified anger, instead of deploying the military and police against them and the tactless enabling of hired, armed thugs to unleash terror on peaceful protesters,” he said.

He said PANDEF also deems the nationwide Operation Crocodile Smile exercise announced by the Nigeria Army, as provocative and another unnecessary misadventure, adding, “PANDEF’s stance is that soldiers have no business trying to do police job and do not have to get involved in the #EndSARS protests.

“They are more needed in the North East and North West where Boko Haram and bandits are making life unbearable for citizens.”

Nkanga said it was unbelievable that the police would stand aloof and watch, while hoodlums attack peaceful protesters in parts of the country.

He lamented that protesters in Kano and other cities in the north, supporting SARS are allowed to process around the cities without being attacked and the police shooting at them.