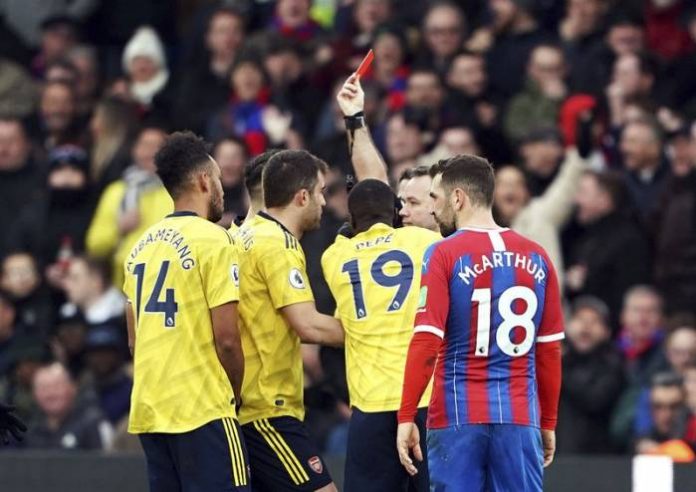 Arsenal’s prolific goal scorer and Captain of the side Pierre-Emerick Aubameyang was sent off by the Video Assistant Referee (VAR) following a reckless challenge.

Arsenal took the lead in the 12th-minute with Aubameyang finishing off a fine 18-pass move to take his tally to 16 goals in all competitions.

David Luiz started the move firing the ball into the path of Mesut Ozil, who then fed Lacazette outside the area. The Frenchman singled out his strike partner in the box, and Aubameyang made no mistake from
10 yards for his 11th goal in the premier league.

Jordan Ayew hit back for the home team nine minutes into the half-time
through deflected effort, before Arsenal were reduced to ten men as the VAR intervened to send off Aubameyang for a dangerous tackle midway into the second half.

Ten-man Arsenal didn’t back down from the fight as their effort hit the wood work while Palace’s chance was cleared off the line.