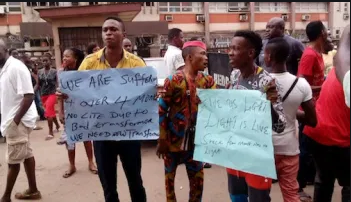 A peaceful protest against epileptic power supply in Kafanchan, Kaduna State, on Monday, turned violent as one person was shot by security operatives.

A protester was shot in the back and rushed to the hospital, as security operatives fired shots to disperse the angry mob, when the protest turned violent.

A car and some motorcycles at the KEDC office were reportedly torched by protesters.

Stating reasons for the protest, they said power supply in the area was not commensurate with the ‘high billing’ they usually received monthly.

The protesters maintained that the power situation in Kafanchan had deteriorated in recent times, while calling for an end to excessive billing by KEDC and the removal of the current area manager, because the deterioration in supply occurred under his watch.

Efforts to speak with the Area manager, however, proved abortive as he was said to be out of town. (NAN)