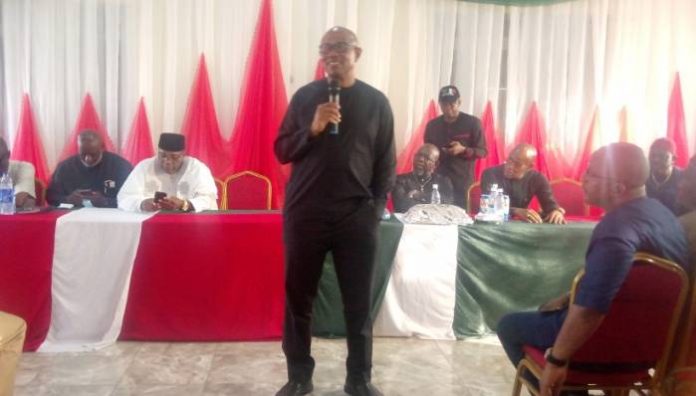 Obi, a former governor of Anambra, urged them to be guided by their conscience and vote in the interest of the country’s future and that of their children.

He spoke on Monday in Awka, when he met with prospective delegates from Anambra.

According to him, monetary consideration should not be the major factor in chosing the party’s presidential candidate.

He said he decided to end his national consultation in Anambra, after going round the 36 chapters of PDP, plus Abuja, to demonstrate his commitment to the cause.

Obi said that his experience from the tour had strengthened his resolve to seek an opportunity to steer the ship of the country.

He likened the ship to the “titanic, which was sinking while those on top were making merry.”

“Do you want to collect money and bequeath a society of hopelessness, kidnapping, banditry and poverty to future generations?

“Is that the society you want for your children?

“Remember, you can’t transfer your delegate status to your children, this is an opportunity for you to decide.

“I am competent, I am committed and I have the capacity to turn this country around, please give me your votes,” Obi said.

He said he saw opportunities across the regions of the country during his tour.

“I concluded that it is unacceptable for the country to possess such huge human, arable land and natural resources and still have over 100 million people living in poverty,” he said.

He said that while the Kainji Dam that was built with the first money borrowed by Tafawa Balewa in 1964 was still standing, there was no justification for the present borrowings that had plunged Nigeria into heavy indebtedness.

He said that Kaduna had more land mass than Netherlands and wondered why Netherlands should earn more from export of agro produce than Nigeria.

Obi said there was no more money to share and that he would shift the conversation from sharing formula to production formula.

According to him, Kaduna can sustain Nigeria, if optimally explored.

“I visited the tomb of Tafawa Balewa because he was the first to borrow in Nigeria to build Kainji Dam which is still standing today.

“Where are the ones we borrowed recently?”

Earlier, Dr. Doyin Okupe, a former presidential spokesman to former President Olusegun Obasanjo, described Obi as the best aspirant from across the country in the race.

Okupe, who likened Obi to late MKO Abiola, called on the delegates not to deny Nigerians the opportunity to vote the candidate they yearned for.

He said that having a president from the South-East should not be seen as handing out a token but a necessity.

He contended that the zone had one of the most qualified candidates to preside over the country.

“There is a national frenzy about Peter Obi, the second after Abiola.

“Every independent opinion poll in the last two weeks has favoured him.

“He has gone round the world seeking knowledge.

“He is the best from the east and better than others across the country.

“Anambra is still reaping benefits of Obi’s reign in the state. “I will stop supporting him, if I see a candidate with better academic qualifications than your son,” Okupe said.(NAN)