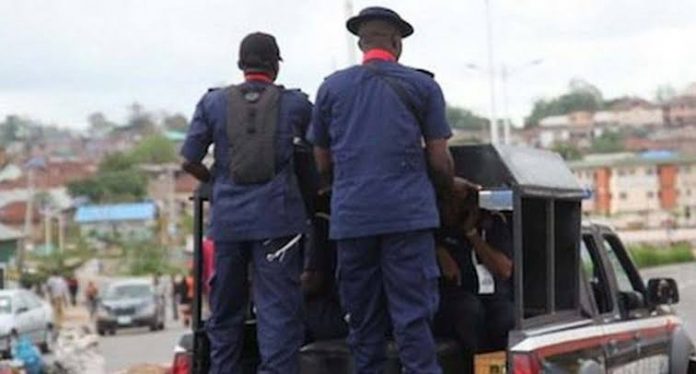 This was disclosed in a statement by the corps’ Public Relations Officer, Oluwole Olusegun, and made available to newsmen on Saturday in Ibadan.

Olusegun quoted the Commandant of NSCDC in Oyo State, Iskilu Akinsanya, as saying that the suspects were apprehended by the Agro Rangers Squad of the command.

Akinsanya said that the suspected kidnappers were arrested at about 9:15p.m on Thursday through information received from the Chief Jowuro of Oke-Ogun, Alhaji Baani Abubakar, that suspected kidnappers operating in the area were spotted in Bobajiroro Hotel, Oke Adeta, Iseyin.

“The eight suspected kidnappers which consist of six males and two females were arrested at the Bobajiroro Hotel.

“During cross examination of the suspects, one of the suspects trailed to the scene of the arrest who was 25 years old, declared that the number used in tracking him belongs to his friend.

“Further interrogation revealed that those numbers were stored on his phone with different codes such as 52,42,33, while the suspect later assisted the corps in apprehending the remaining seven suspects,” Akinsanya said.

The commandant said that the suspects would be handed over to the Anti-Kidnapping Squad of the police in the state for further investigation and prosecution.