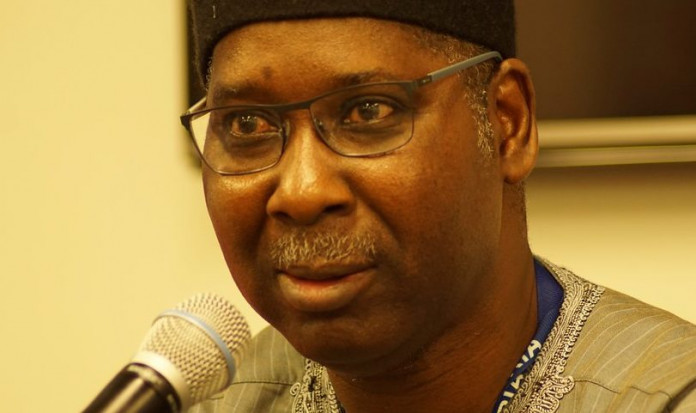 Nigeria’s Permanent Representative to the United Nations, Prof. Tijani Muhammad-Bande, has formally declared his intention to vie for the presidency of the 74th UN General Assembly, UNGA.

Muhammad-Bande made the declaration at a cocktail party attended by world diplomats and delegates in New York on Friday evening.

This came barely eight days after the current UNGA president, Ms Maria Espinosa, announced him as the first candidate for the position.

The News Agency of Nigeria, NAN, reports that election of the president of the 74th UNGA will hold at the UN headquarters on June 4.

In a statement on its website, UNGA said the presidency of the 74th session was zoned to Africa in “full respect of the established principle of geographical rotation”, among other reasons.

The current president, who is the Foreign Minister of Ecuador, was elected on June 5, and assumed duty on Sept. 18, 2018.

Thus she will step aside on Sept. 17, as the UNGA presidency runs on a one-year tenure.

According to the statement, an informal interactive dialogue with Muhammad-Bande is scheduled for May 13, in line with UNGA’s resolution 71/323 titled “Revitalisation of the Work of the General Assembly.”

At the session, the Nigerian permanent representative will have the opportunity to respond to questions from other stakeholders.

Addressing guests at Friday’s event, the candidate pledged to make the organisation stronger and work better for its member states and their citizens.

He said as president of the 74th Session, he would focus on the effective implementation of existing mandates, and make a contribution in all defined follow-up areas.

He also pledged to ensure that the decisions reached and resolutions passed at the general assembly were implemented for the benefits of citizens.

Muhammad-Bande, who hails from Zagga in present day Kebbi, has had an outstanding career as a scholar and diplomat.

Between January 2000 and February 2004, he was the Director-General of the Centre African de Formation et de Recherche Administrative pour le Development (CAFRAD) in Tangier, Morocco.

CAFRAD is Africa’s premier institution with responsibility for training and research in public administration and management.

Besides other positions both locally and internationally, he was the Director-General of the National Institute for Policy and Strategic Studies (NIPSS) between 2010 and 2016.