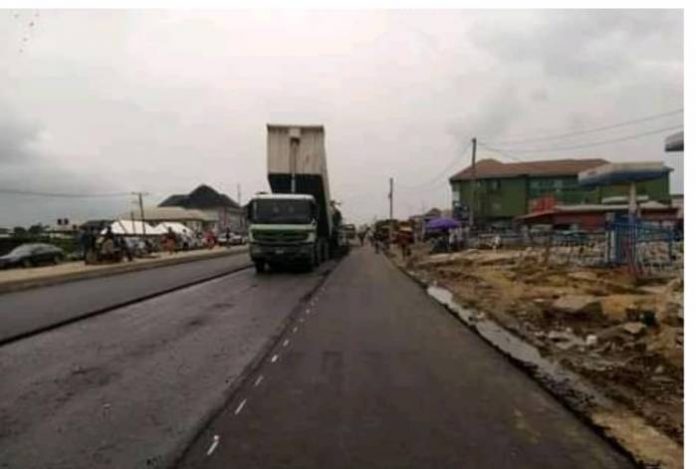 The failed portion of the Nkpolu-Rumuigbo junction Obio-Akpor local government area on the East-West road in Rivers State and its perennially flooded spot has finally been fixed.

Road users who over the years have been going through nightmares of travelling on the failed portion of the East-West road in Port Harcourt have now heaved a sigh of relief.

The contentious spot has been fixed by SETRACO under the supervision of the Federal Ministry of Niger Delta Affairs.

Our Correspondent who visited the former nightmarish portion observed that despite the torrential rains that usually submerges the spot perennially, it is now a smooth drive without flood.

Unlike the previous years, the two lanes of the road are now wearing a new look free of traffic jams.

Commenting on the new state of the road, Ms Obiaruko Ndukwe, a journalist and publisher who heads Citizen’s Quest Initiative, a nongovernmental organization that has been championing the advocacy for the repairs of the bad spot expressed happiness over the job.

“At the Initiative, we are happy to be part of this success story and the milestone achieved despite criticisms that trailed it.”

She thanked President Muhammadu Buhari and Hon. Minister of Niger Delta Affairs, Senator Godswill Obot Akpabio and other stakeholders who ensured that the bad spot was fixed.

There were several protests to draw attention to the bad portion of Nkpolu-Rumuigbo junction by youths of the Nkpolu-Rumuigbo community and members of the Civil Societies Organizations. In one of the protests, at least one life was lost allegedly from the gunshots fired by the military to disperse the Protesters.

The road became a problem for commuters on a daily basis. This challenge caused serious economic, social and environmental issues that also affected the owners of businesses and properties within the area. Before the road was fixed.

It was gathered that the Ministry of Niger Delta Affairs in 2009 awarded the construction of sections I and II of the East-West Road to SETRACO Construction Company at a construction cost of N74.7 billion.

However, under the administration of President Goodluck Jonathan, the cost was increased to N133.7 billion. The failed Nkpolu-Rumuigbo junction is located in section ll subsection l of the East-West Road.

According to a report from SETRACO, the road was in perfect condition before handing it over to its client; the Ministry of Niger Delta Affairs over five (5) years ago.
The road began to fail due to improper drainage in channelling rainwater. In other words, there was no adequate drainage system on both sides of the road.

At the heat of the protests, SETRACO Construction Company, the Contractor handling the road pointed out that the Ministry of Niger Delta Affairs was aware that the cause of the problem was a building that was blocking a major culvert and waterway from the Nkpolu-Rumuigbo junction.

SETRACO then recommended that the owner of the property be paid compensation, and the building brought down to give way for the construction of high-wall concrete drainage.

However, if compensation for the owner of the building could not be achieved, SETRACO has also recommended the construction of a 2-kilometre drainage. This drain would link to another water outlet around the area.

Our Correspondent found out that the second option to the challenge was adopted by the civil engineers and stakeholders, especially members of the immediate community. Underground drainages were constructed linking the drains to natural waterways and nearby canals.

It is also noteworthy that the unfortunate situation outlived several administrations that paid lip service to the poor state of several failed and uncompleted portions of the East-West road.

Commenting on the new look of the spot, Wenenda Kingsley Wali, Chieftain of All Progressives Congress, APC, in Rivers State, said “Senator Godswill Akpabio has redeemed himself by complimenting the Governor Nyesom Wike’s Flyover revolution. I literally cruise to the city centre via the Okoro-No-Odonu flyover because of the Flyover and Nkpolu junction repair. The completion of the Nkpolu junction remedial works is worthy of celebration. This is in addition to the completion of the Tank junction repair works.

“For those who travel the Port Harcourt – Warri route, you must be celebrating the renewed energy by SETRACO on that route. I’ll use this opportunity to appeal to Sen. Godswill Akpabio to help and wipe the tears of Bayelsans. Their area needs attention too.”

The next stop is the Eleme junction-Onne junction reconstruction. This will be a landmark achievement and history will never forget. Eleme-Onne route is in a bad state, but from the experience of Nkpolu and Tank junctions, I believe that in the end, the people who ply that route will also smile.” Wenenda Wali said.