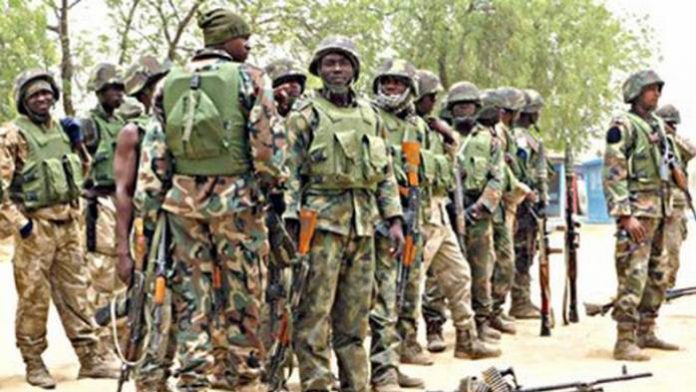 The officers, who comprised serving and non-serving personnel, graduated in different fields in the six months intensive training at the school.
The new officers were conferred with the rank of Lieutenant in the Nigerian Army by the Chief of Defence Staff (CDS), Gen. Gabriel Olonisakin.

At the ceremony, Olonisakin charged them to brace up to the service of their fatherland, saying that their preparedness to contribute to national security and defence of the territorial integrity of Nigeria was expected to be at a higher level.

He advised them to demonstrate high level of discipline and shun every form of misconduct in the discharge of their constitutional responsibilities at all times.

“As professional officers who will shortly be commissioned into the Nigerian Army, each and every one of you have various roles to play based on your expertise and previous experiences, in curtailing the country’s security challenges.

“As junior leaders, you will be confronted with various challenges. The Nigerian Army expects you to add value to the system by being innovative and providing objective leadership to the men that will be placed under your watch.

“I wish to make it clear to the passing-out cadets that the Nigerian Armed Forces has zero tolerance for indiscipline and unprofessional conduct.

“You are expected to exhibit complete and absolute loyalty to the President, Commander-in-Chief of the Armed Forces of Nigeria, as provided in the Constitution and the Oath of Allegiance which will be administered to you shortly.

“You are also expected to be guided by existing regulations in your personal and professional conduct.

“I need to advise you that any act of disloyalty, disobedience to constituted authority, insubordination and other unprofessional conduct will attract appropriate sanctions,” he said.

The CDS also admonished the newly-commissioned officers to understand and abide by the extant condition of service of the armed forces, assuring them that they would be exposed to further training.

He said that the entry of the new officers into the armed forces was significant considering the various security challenges facing the country at the moment.

According to him, you are entering into the army at a period when we are consolidating on the gains of years of confronting various security challenges in the country.

“The Nigerian Army, in conjunction with the other services and other security agencies, have been engaged in intensive combat against terrorist groups, especially in the North-East through Operation LAFIYA DOLE.

“It also includes our involvement in multinational operations in the Lake Chad Basin under the auspices of the Multinational Joint Task Force, MN/TF.

“The Army is equally involved in anti-banditry operations in various parts of the country, especially the North-West, North-Central and the South Western region.

“In the South-South, the activities of miscreants who are bent on crippling the economy by engaging in wanton destruction of oil and gas infrastructure constitute a major security challenge.

“To address these security challenges, the President, Commander-in-Chief, authorized the conduct of series of operations across the country.

“In all these operations, especially in the North-East, we have made steady and deliberate progress.

“However, we still contend with fleeing terrorists engaging in acts of suicide bombing with Improvised Explosive Devices (1503) and other heinous crimes,” he said.

Olonisakin commended Buhari for his continuous support to the armed forces, stating that the successes of the military in various operations would not have been possible without the unrelenting support of the president.

He also commended the Chief of Army Staff, Lt.-Gen. Tukur Buratai, for his resilience, dedication and doggedness in providing effective leadership to the Nigerian Army.

According to him, the Nigerian Army has indeed demonstrated outstanding professionalism in all its operations and in improving the welfare of officers and men under the current transformational leadership of the Chief of Army Staff.

“I, therefore, urge you to keep up the good work. Once again, congratulations on this remarkable achievement,” he said.