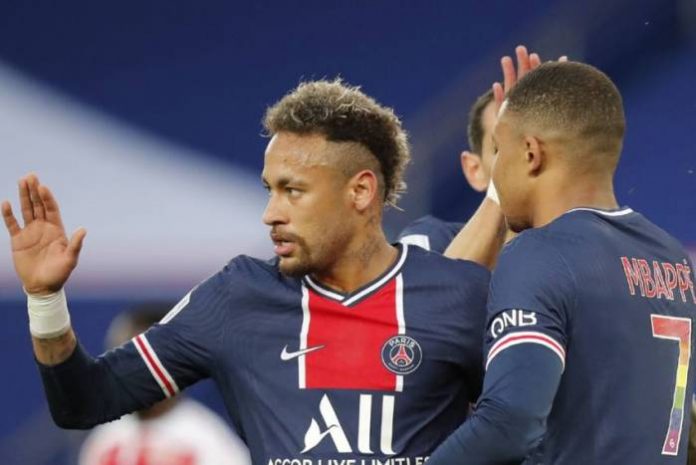 Neymar and Kylian Mbappe were on target as Paris Saint-Germain (PSG) kept alive their hopes of retaining the Ligue 1 title with a 4-0 victory over Reims on Sunday.

Mauricio Pochettino’s side will go into next weekend’s final round of the season against Brest one point behind leaders Lille, who were held to a 0-0 draw by Saint-Etienne.

PSG will only get their hands on the title if they better the result Lille get against Angers next weekend, needing Christophe Galtier’s team to slip up.

Neymar opened the scoring early on with a penalty kick after Yunis Abdelhamid had been dismissed for handling an Mbappe shot.

World Cup winner Mbappe, Marquinhos and Moise Kean then wrapped up the most routine of victories.

Any hopes Reims had of securing back-to-back wins at the Parc des Princes were all but extinguished in the 13th minute.

Mbappe was not to be denied 11 minutes later, sliding home from close range after Thomas Foket had inexplicably rolled the ball across the face of his own goal.

France international Mbappe then fired wide after being played in by a sumptuous Neymar flick as PSG failed to add the third goal their dominance deserved before the interval.

Mbappe went close on a number of occasions at the start of the second period, while Neymar saw an effort ruled out for offside after Ander Herrera had struck the post from distance.

Neymar turned provider for PSG’s third after 68 minutes, his corner-kick from the left headed past Predrag Rajkovic by Marquinhos from six yards.

Substitute Kean fired into the bottom-right corner from 15 yards a minute from full-time as PSG inflicted a first defeat in six away games on Reims.(dpa/NAN)