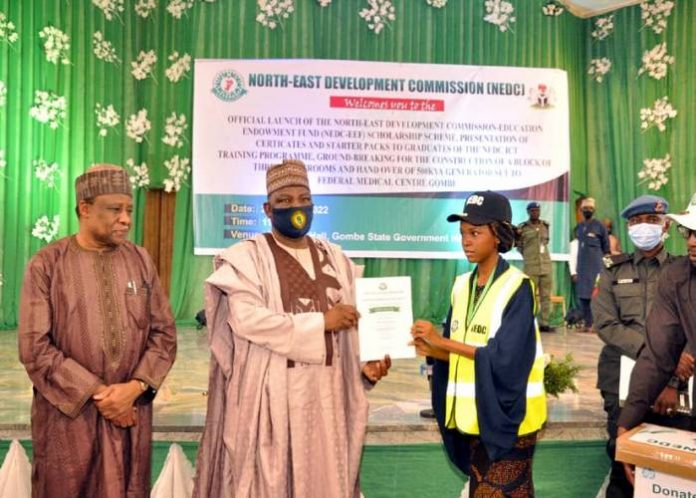 The North East Development Commission (NEDC) has launched the Education Endowment Fund as well as Scholarship Portal to help the people in exploring their potentials towards positive contributions.

A new set of 500 KVA Generator was also donated to the Federal Teaching Hospital, Gombe while 500 units of Houses under construction at the Western Byepass, was also inspected.

Gombe State Deputy Governor, Manasseh Daniel Jatau, who represented the State Governor, Mohammed Inuwa Yahaya at the launch, appreciated President Muhammadu Buhari for establishing the NEDC which has been contributing immensely in improving the lives of citizens in the region.

He said ever since the establishment of the NEDC, the commission has pursued it’s mandate vigorously to ensure capacity building and human capital development, reduction of the high illiteracy rate, extreme poverty of the region among others.

He lamented the destructive activities of Boko Haram Group which has lasted for some years, however expressed happiness that their activities is being checkmated and scaled down by security agencies, concerned citizens, volunteer groups and Governors of the North East’.

He said, “Gombe state has at all times shown the greatest political will to support, liaise, cooperate and learn from development partners, the NEDC being no exceptions.

“For emphasis, let me acknowledge that the programmes, today covers education, shelter and capacity building, human capacity development. All these relate the various goals of Sustainable Development Goals of the United Nations” he said.

Hajiya Sadiya Umar Faruk, Minister of Humanitarian Affairs, Disaster Management and Social Development, who was represented by Group Captain Sadiq Shehu, said the activities of Boko Haram has created a set back in the education sector and compounded the poverty level and unemployment in the region.

The Minister explained that the investment in education is aimed at changing the wrong ideologies of insurgents, reversing the level of illiteracy and unemployment among others.

He said the Commission has upgraded three schools in Gombe State, and is liaising with other sectors of the economy to know their areas of need for intervention.

Some of the graduates and beneficiaries of Starter Packs, Jamilu Ibrahim and Samaila Danjuma appreciated the NEDC for assisting them and creating them a means of livelihood pledging to make good use of the opportunity given them.