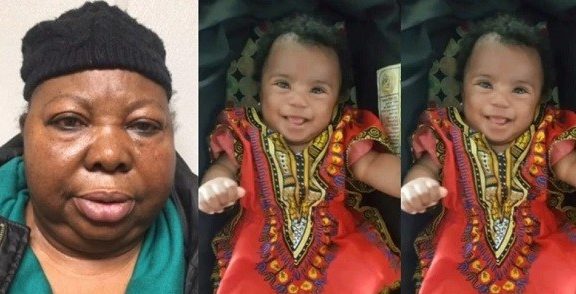 Oluremi Adeleye, a 73-year-old nanny convicted of murder in the U.S. for force-feeding a baby milk has been sentenced to 15 years in prison.

“While I don’t find the defendant is an evil-intentioned baby slayer, I also don’t find her actions were accidental.” Mason said before handing down the sentence.

Adeleye, a native of Nigeria, testified in her own defense at her trial that she was “cup-feeding” the baby to ensure she didn’t go hungry, a custom in her home country.

She and her attorneys said that she did not mean to hurt the child and that Enita’s death was a “tragic accident.”

Adeleye had others testify in her defense, saying that cup-feeding — pouring liquid in one’s hand to feed children when they do not want to eat but need to be fed — was common in Nigeria.

“Please forgive me. I didn’t mean to kill your child,” Oluremi said in court on the day the judgement was delivered.

The child had roused the nanny from a nap, and the girl essentially drowned in milk while in Adeleye’s care in Glenarden on Oct. 24, 2016, prosecutors said at trial.

Enita’s mother, Nikia Porter, said at the sentencing that she moved from the South Side of Chicago to escape gun violence that could have put her family in danger.

“I didn’t want to lose my child to a stray bullet…. I lost her to a formula.”

Adeleye, opted for a bench trial, in which a judge weighed her fate instead of a jury.

In finding Adeleye guilty of all the charges against her, Mason said Adeleye lied to homicide detectives in recorded interviews about whether she unscrewed the cap of the bottle to feed the child.

The shifting story, Mason said, demonstrated a “consciousness of guilt.”