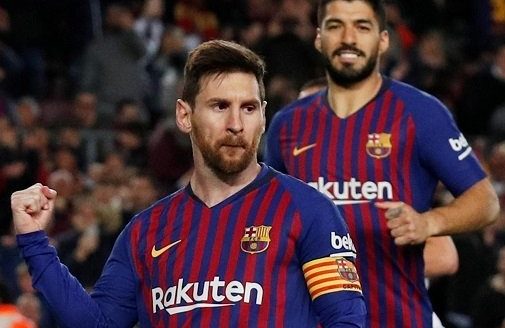 Lionel Messi created a goal and scored another as Barcelona came from behind to beat struggling Rayo Vallecano 3-1 at home on Saturday and stay seven points clear at the top of La Liga.

Rayo, who have now lost their last 12 games against Barca, took a shock lead midway through the first half when forward Raul de Thomas — who is on loan from Real Madrid — ran past two defenders before arrowing a shot into the bottom corner.

The Madrid side’s unlikely lead at the Nou Camp lasted a quarter of an hour and ended when Messi whipped in a free kick for Gerard Pique to appear unmarked and head home.

Barca won a penalty early in the second half when Luis Suarez was fouled and Messi converted to put the league leaders in front and the Uruguayan forward made sure of the points with a simple finish from close range in the 82nd minute.

Coach Ernesto Valverde started without Ousmane Dembele and Ivan Rakitic but fielded an otherwise first-choice starting 11 even with a Champions League last-16 second leg against Olympique Lyonnais coming up on Wednesday.

The win restored Barca’s seven-point gap over nearest challengers Atletico Madrid, who earned a 1-0 victory at home to Leganes.

Rayo are 19th in the standings and two points from escaping the drop zone as the pressure mounts on Coach Michel.