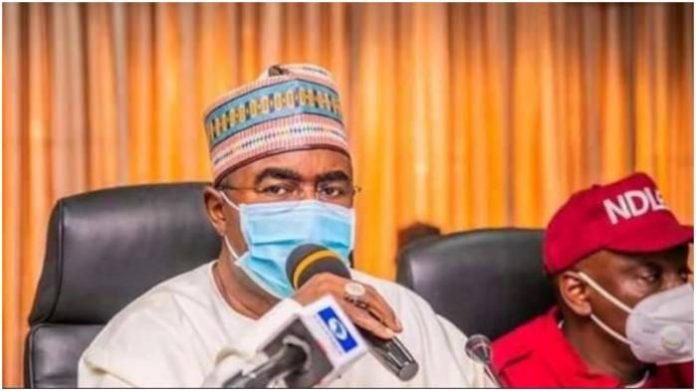 The Chairman, National Drugs Law Enforcement Agency (NDLEA), retired  Brig.-Gen. Buba Marwa has cautioned Nigerians on the dangers of complacency in tackling drug abuse among youths in the country.

Marwa gave the warning at the 10th Anniversary Lecture and Investiture of REALNEWS Hall of Fame in Lagos on Thursday.

The News Agency of Nigeria (NAN) reports that the  theme of the programme is: “Drug Abuse among Youths in Africa: Implications for Nigerian Economy and 2023 Election.

According to him, by 2030, demographic factors project the number of people using drugs to rise by 11 per cent around the world, and as much as 40 per cent in Africa alone.

The chairman said this was an early warning that Nigerians should all take serious and ensure they kept their young people away from dangerous substances that could compromise the bright future ahead of them.

Marwa said since drugs and violence go hand in hand, it would be recalled that the social upheaval in South-East states in the last quarter of 2021 was caused partly due to an outbreak of abuse of methamphetamine.

He said: “That episode gave us a foresight of the kind of instability that can result from abuse of illicit drugs by young people.

“With so many idle hands around, some of whom are hooked on drugs, the 2023 general elections will be a testing period.

“With such a huge youth population, you may begin to think that the election in the country will be won by a youth referendum.

“However, with so many youths involved in drug abuse, they can hardly make the kind of strong impact that people envisage.

“Just as they cannot hold down a job, they also cannot exhibit prudent electoral choices or execute the civic duty of voting.”

Marwa said the country might end up having the phenomenon of self-disenfranchisement among young people.

He added that this was because those who were into drug abuse would make themselves available as tools for irrational activities such as electoral thuggery and violence.

Marwa, however, assured Nigerians that the security agencies were aware of this and were working to forestall it.

In her welcome address, the Publisher, Realnews Magazine and Publications,  Maureen Chigbo, said drug abuse had been linked to incidents of violence and insecurity in the country.

The publisher said that the psychological well-being of all the governorship and presidential candidates be evaluated.

According to her,  it has been suggested that  those seeking public offices should be evaluated and a public report made of all of them to ensure they are drug free.

“All these are genuine concerns given that the World Drug Report 2021, showed that in Nigeria with 14.4 per cent, the drug use prevalence is significantly higher than the global average.

“The report also highlights the need to close gap between perception and reality to educate young people and safeguard public health,” she said. (NAN)