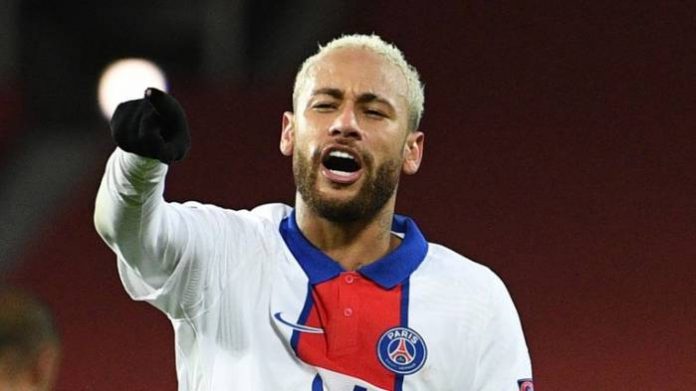 Manchester United’s qualification to the last 16 of the Champions League hangs in the balance after PSG won a lively encounter 3-1 as Fred was sent off.

Neymar struck first for the visitors (5) in a game they couldn’t afford to lose in Group H before Fred escaped with only a yellow card when pushing his head aggressively into Leandro Paredes.

Fred, who committed four fouls in total, received his marching orders less than a minute after United fell behind for a second booking, although replays showed he did get the ball.

PSG made the extra man count in the closing stages when Neymar rubberstamped the victory (90), leaving United still needing a point from their final game in RB Leipzig to qualify for the last 16.

Neymar was kept quiet in the corresponding fixture between these two but was in no mood to be silenced at Old Trafford, opening the scoring inside six minutes.

Thomas Tuchel’s men went on a break that ended with Neymar firing home from an acute angle after reacting superbly to a blocked Kylian Mbappe strike.

United were perhaps fortunate not to be further behind after the first quarter of the match as Alessandro Florenzi took aim with a strike from distance, before Neymar tried an acrobatic effort that David de Gea took care of.

Frustrations were growing within the home camp and Fred looked set to be dismissed when Paredes fell to the deck clutching his face after Fred pushed his head into his.

The VAR informed the referee to check the monitor but the referee only showed a yellow card after watching the replay – a decision that Fred was lucky to get away with.

An equaliser didn’t look like coming until Aaron Wan-Bissaka cut a ball back to Rashford, whose low strike cannoned off Danilo and flew into the PSG goal.

Fred’s continued to walk the tightrope when he stepped on Paredes’ foot in a challenge that led to the PSG midfielder being booked.

Ole Gunnar Solskjaer decided against withdrawing Fred at the break but United came out at full throttle and should have taken the game away from PSG.

Martial was guilty of ballooning an effort into the Stretford End after being found by Rashford, having linked up superbly with Cavani.

The former PSG man was showing his class and he went so close minutes later when he tried an exquisite chipped effort that left Navas stranded and came back off the bar. Bruno Fernandes cut the loose back to Martial but the strike was blocked.

PSG responded when Marquinhos met a cross with a header but it clipped the crossbar and then De Gea tipped a low effort from Mitchel Bakker around the post.

The game could have gone either way but it was the French champions who edged ahead on 69 minutes.

Ander Herrera made an impact from the bench, hitting a wayward strike that Abdou Diallo turned across for Marquinhos to steer home. An offside VAR review was conducted but Aaron Wan-Bissaka was keeping the PSG skipper onside.

From the kick-off, Fred’s touch let him down and he flew into a sliding challenge with Paredes that the referee deemed his final act of the night although he did get the ball with this particular one.

Substitute Paul Pogba went close with an outstanding strike and Fernandes’ near-post header was saved as depleted United pushed, only to be caught cold at the end as Rafinha cut back for Neymar to turn home in stoppage time.

The result means the top three in Group H are all level on nine points heading into the final fixtures, with United knowing a point in Leipzig will see them reach the last 16.