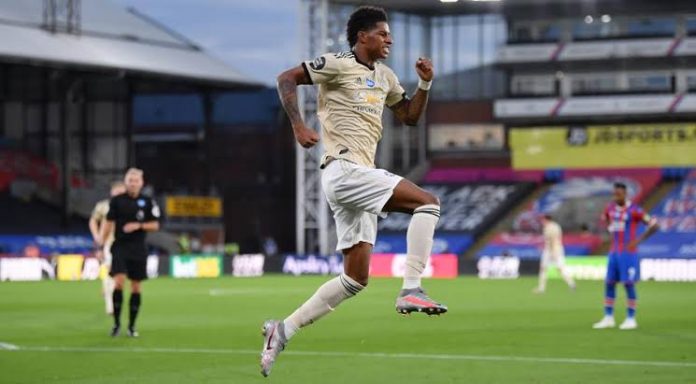 Manchester United kept up their chase for a Champions League qualification spot with Marcus Rashford and Anthony Martial on target in a 2-0 Premier League win over Crystal Palace at Selhurst Park on Thursday.

United, with two games remaining are in fifth place on 62 points, behind Leicester City on goal difference with third-placed Chelsea on 63.

United visit Leicester on the final day of the season.

Rashford put United in front on the stroke of halftime, his smart footwork sending the Palace defence the wrong way before he coolly slotted home.

Mid-table Palace thought they had drawn level in the 55th minute when Jordan Ayew slid in a low cross from Wilfried Zaha but the goal was ruled out for the tightest of offsides after a VAR review.

United made sure of victory, vital after Leicester’s 2-0 win over Sheffield United, when Bruno Fernandes and Rashford combined smartly to feed Martial, who held off Scott Dann and drove in the second.

Ole Gunnar Solskjaer’s side are now unbeaten in 19 games in all competitions. (Reuters/NAN)