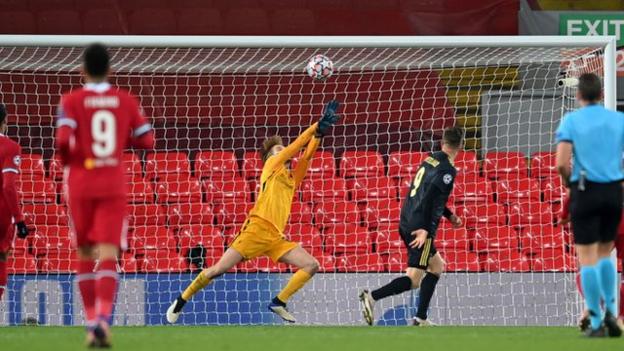 Liverpool guaranteed their place in the last 16 of the Champions League after Andre Onana’s error handed Curtis Jones the winning goal in an edgy 1-0 victory.

Andre Onana misjudged the flight of Neco Williams’ cross and 19-year-old midfielder Jones took advantage to score with the outside of his right foot.

Caoimhin Kelleher, deputising for first-choice keeper Alisson who was missing with a hamstring injury, also played his part in Liverpool’s win, a tremendous stop to deny substitute Klaas-Jan Huntelaar the pick of his saves.

Jones also rattled a post before his goal ensured Liverpool, with one game to spare, joined Premier League rivals Manchester City and Chelsea in the knockout stage.

A surprise home defeat by Atalanta last week had threatened Liverpool’s dominance in Group D, with the Italians and Ajax closing in.

But Jurgen Klopp’s side overcame their latest worrying injury setback to progress after an open and entertaining game at Anfield.

It was far from straightforward for the Reds, Klaassen heading wide for Ajax when he should have scored, while Neres was denied by the woodwork after Kelleher had done well to push away an attempt by young Brazilian forward Antony.

The 22-year-old’s stop to deny Huntelaar, having earlier produced a one-handed save to keep out Noussair Mazraoui, was exceptional and at the final whistle Klopp went straight to the Republic of Ireland squad member to congratulate him on his performance.

With Atalanta held in Denmark by Midtjylland, Liverpool are four points clear with one game to go and uncatchable at the top.

Having already secured the group, Klopp will be able to rest players when the Reds face Midtjylland in Denmark in the final round of games on 9 December.

More injury woe for the Reds

On a night when captain Jordan Henderson made his first club start since 8 November after injury, Liverpool revealed their first-choice keeper had become the latest player to join the list of casualties.

Their campaign has been littered with injury setbacks and Alisson’s hamstring problem, which is likely to rule him out of Sunday’s league game with Wolves and next week’s Champions League game against Midtjylland, means the Reds are now without nine senior players with games coming thick and fast.