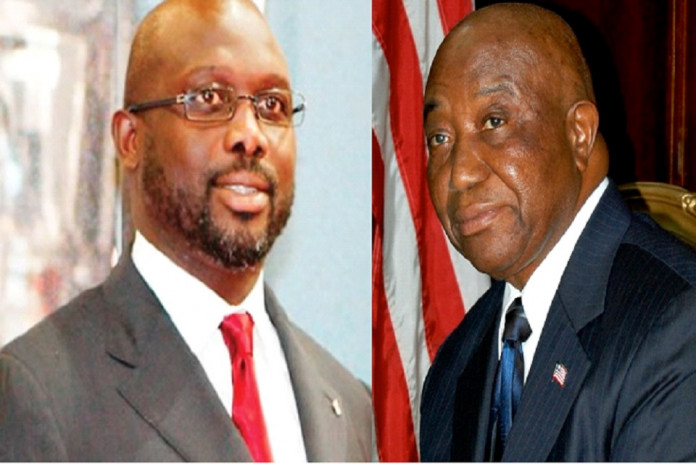 It is not yet victory for former soccer star, George Weah,  in the Liberian election as he would need to go for a run-off against incumbent Vice-President Joseph Boakai.

Weah ended up with 39 per cent of the votes, 11 per cent less than the 50 per cent needed to win outright.

Runner-up Boakai recorded  29.1 per cent out of  a total of more than 1.5 million votes counted and with 95.6 per cent of polling stations having reported.

Boakai was more than 280,000 votes ahead of the third placed candidate, lawyer Charles Brumskine, on 9.8 per cent.

The final certified results from Tuesday’s poll must be announced by October 25.

But with less than five per cent of precincts yet to be counted, it appeared mathematically impossible that the order would change.

Turnout based on votes counted so far was nearly 75 per cent.

A total of 20 candidates competed in last week’s poll seeking to succeed Nobel Peace Prize winner Ellen Johnson Sirleaf in what would be Liberia’s first democratic transfer of power in more than 70 years.

Weah and Boakai had both predicted outright victory in the first round.

Supporters at Weah’s headquarters in the capital Monrovia crowded around cars listening to the results broadcast on the radio and voiced frustration as it became clear that a second round of voting was unavoidable.

“We need to be calm. But we are worried that they are going to cheat us. We feel disenchanted from 2005 and 2011. People say ‘no second round’ because of the desire they have,” Weah supporter Luke Harris, 31, said.

He finished runner-up to Johnson Sirleaf in a 2005 election that helped draw a line under years of civil war that killed hundreds of thousands of civilians.

He was the vice-presidential candidate on a ticket with Winston Tubman, who lost to her six years later.

Officials from both Weah and Boakai’s campaigns said they would accept the result.

“We are disappointed that there is going to be a run off. We had anticipated that we would win in the first round. But we will accept it and go with it,” said Mohammed Ali, spokesman for Boakai’s ruling Unity Party.

Even before Sunday’s results announcement, both campaigns had already begun courting other candidates, seeking their support in the run-off.

Officials with ex-warlord-turned-senator Prince Johnson, who finished third in the 2011 election but had a disappointing showing this year, said he had already been contacted by both Weah and Boakai.

Brumskine has denounced the vote, claiming it was plagued by fraud and called for a new election.

International observers gave the poll a clean bill of health, but the vote will be re-run in two polling places in Nimba County on Tuesday due to irregularities, although that measure only concerns a few thousand votes.