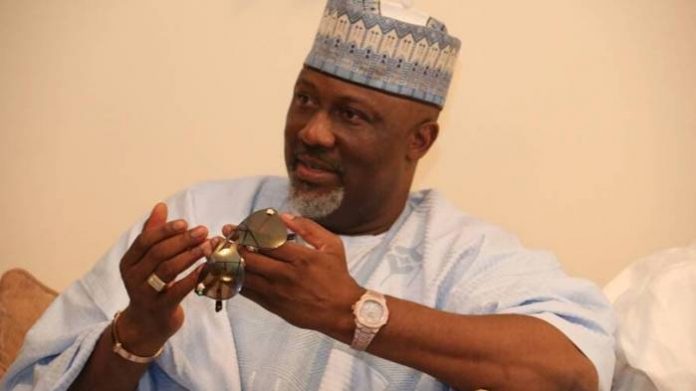 The PDP Senatorial Candidate for Kogi West, Senator Dino Melaye has accused the state governor and the All Progressives Congress, APC, Yahaya Bello, of being desperate to hang on to power.

The Senator made the comment while reacting to the attack on his polling unit by political thugs but noted that despite the violence and thuggery characterising the election, he was confident of winning.

Melaye however, disclosed that those who led the thugs to attack his polling unit have been arrested by the police and have made confessional statements as to who sent them.

He also said the culprits were presently in police custody.

Melaye said he was not surprised by the attack as they had earlier given the police information of possible areas of violence and ballot box snatching.

He claimed that if the election was conducted 100 times, he was confident of emerging winner, saying “if they are popular, they will not be introducing violence into the process. They cannot achieve what they want through the gun.

“I am calling on the security agencies and INEC to respect their promise that where ever ballot boxes are taken away, it cannot be recorded and that votes in that unit will be cancelled.

“For me, the election in my unit went over halfway before the hoodlums came and started shooting. The bad thing is that one of the boys was shot and was taken to the hospital by the police.

“I am happy they have been apprehended and that our cry that Yahaya Bello wants to be governor, by all means, is already established. All those arrested are all APC members and they have all confessed who sent them. We must see the end of this matter because we will not allow it to be buried.