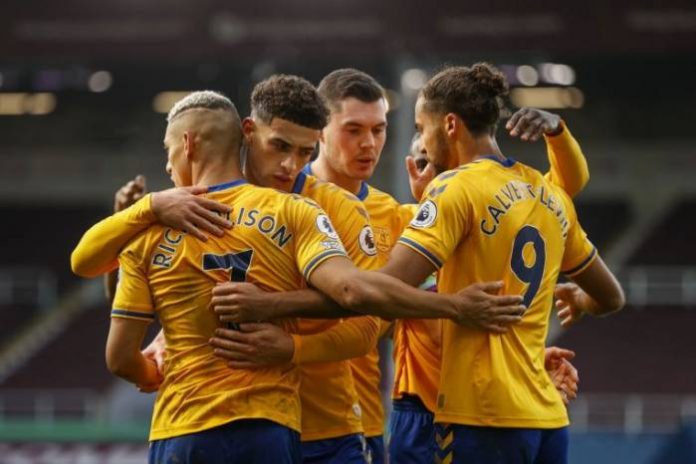 Goalkeepers were at the fore as Everton drew 1-1 at Burnley in the Premier League on Saturday after Dominic Calvert-Lewin cancelled out Robbie Brady’s early opener for the hosts.

Carlo Ancelotti’s Everton, seventh in the table, have now won just once in their last six games while Burnley remain second-bottom in spite of their most positive display of the season.

Everton’s Jordan Pickford dived superbly to keep out a close-range Chris Wood header, while Burnley’s Nick Pope denied Gylfi Sigurdsson at the death with a fine save with his feet.

Burnley had grabbed the lead in the third minute when Everton midfielder Allan gave the ball away and Ashley Westwood fed Irishman Brady on the edge of the box who, with his unfavoured right-foot, drilled the ball into the bottom corner.

Pope’s ability to use his feet was evident when he kept out a close-range Calvert-Lewin effort from an Alex Iwobi cross.

Everton had the alertness of Pickford to thank in the 41st minute when Dwight McNeil slipped Wood through, but the keeper was out quickly to foil the Burnley striker.

England forward Calvert-Lewin brought Everton level on the stroke of halftime, timing his run perfectly as he slid in to meet a low cross from the left by Richarlison for his 11th league goal of the season.

Pickford denied Wood again in the 84th, diving to palm away a firm header from a corner, and then Pope kept out Sigurdsson with an excellent save with his outstretched right foot.

McNeil failed to make the most of a late chance for Burnley, scuffing his shot after the ball came to him alone in a central position.

It was a result which helps neither side particularly with Burnley stuck in the relegation zone with six points from 10 games. Everton have 17 from 11, four points off the pace.

Burnley manager Sean Dyche, after his 200th Premier League game, felt Everton’s goal should have been ruled out for a push on Westwood in the build-up.

“I’m aggrieved with the foul that wasn’t given in the build-up for their goal. We’ve had too many of those go against us,” he said.

“Ashley Westwood has turned out of trouble, he’s clipped a tiny amount. I don’t want that to be a foul but they are given every week.

“I am always scratching my head in the modern game and it will be a non contact sport soon,” he added.

Ancelotti felt a draw was a fair outcome.

“We have to accept the performance and the result. We suffered mentally but we were in the game and until the end we played a good game,” said the Italian.