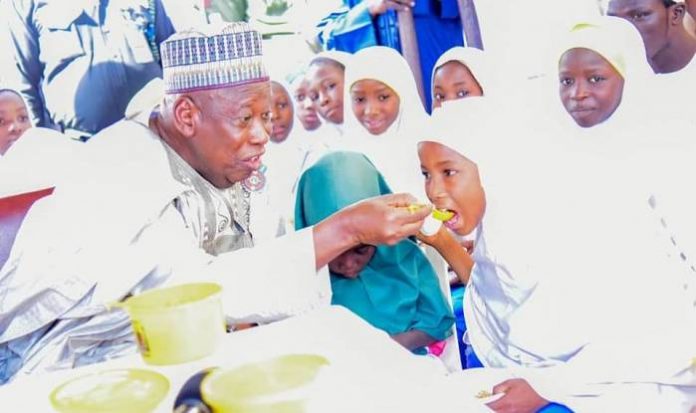 The Kano State government, on Monday, launched its free feeding programme in about 6,800 public primary schools across the state.

Speaking at a ceremony held at Jigirya Primary School, Gov. Abdullahi Ganduje said that the school feeding programme for pupils in Primaries Four to Six was aimed at enhancing school enrolment and improving their wellbeing.

“The programme is part of our administration’s free and compulsory education policy, which targets the vulnerable children, the girl-child education and integration of Qur’anic education.

“This programme must be sustained through transparency and accountability in the system because of its importance. That is why we have set up a Community Promotion Committee to ensure thorough supervision,” he added.

The governor said that quality assurance committees had also been set up to ensure that teaching and learning standards in public schools were not compromised, calling on teachers to be alive to their responsibilities.

He said the aim of integrating Qur’anic schools with basic formal education, alongside supporting them with food, was to prevent the pupils from begging and expand their capacity to engage in developmental affairs.

Ganduje implored well-meaning individuals and corporate bodies to support the government in this direction.

Speaking at the occasion, Chairman, Kano State Community Promotion Committee, Ya’u Yanshana, explained that pupils would be provided with assorted meals between Mondays and Thursdays, while they would be given biscuits on Fridays.