New details obtained by this newspaper show that in recalling Usman Yusuf as the executive secretary of the agency, the president did far more his well-known overruling of the Ministry of Health’s suspension of the man.

What was not made public before now by the government is that Mr. Yusuf was actively being investigated by the EFCC and the ICPC for alleged corruption for over a month before Mr. Buhari reinstated him.

Trouble started for Mr. Yusuf when Mr. Osinbajo while serving as acting president,  ordered for his suspension on the receipt of series of petitions detailing gross abuse of office; stealing and misappropriation of funds.

Now, anti-corruption activists say the latest findings, detailing a deliberate presidential decision to ignore, not only the suspension of an indicted staff but his ongoing investigation by the nation’s foremost anti-corruption bodies, provide the clearest indication of Mr. Buhari’s lack of seriousness about taming corruption.

“It is totally wrong for President Buhari to reinstate the suspended executive secretary of the National Health Insurance Scheme, who is being investigated by the anti-corruption agencies,” Mr. Falana said while speaking to this newspaper.

“It is even very questionable when the said public officer has already been indicted by an administrative panel constituted by the same government. It shows that the government is not serious about fighting corruption.

“The action of the president shows that he is indeed not fighting corruption but promoting it and such action should be seriously condemned,” Mr. Falana said.

“It is very shameful for a president that has consistently boasted about his government’s unwavering commitment to eradicating corruption and was honoured by the African Union in January. This means he is indeed promoting corruption in Nigeria,” Mr. Durueke said.

In an earlier report, this newspaper showed how Mr. Yusuf misappropriated over a one billion naira in suspicious training scheme and pocketed millions in illegal estacodes and allowances.

A separate report also uncovered how the Buhari government illegally withdrew billions from the NHIS funds in a move that violates the law establishing the scheme.

The NEXT EDITION has now obtained proofs the EFCC and the ICPC had been investigating alleged crimes committed by the reinstated NHIS since December 2017.

He was reinstated in February 2018.

In a letter addressed to the acting executive secretary of the health insurance agency dated December 11, 2017, with reference number: ICPC/SDD/TB/53/2017, the ICPC indicated it was investigating the activities of the embattled NHIS boss, who was then under suspension.

With the subject, “Investigative Activities,” part of the letter reads, “You may recall the ongoing investigation on alleged violation of the provision of the Corrupt Practices and Other Related Offenses Act 2000 in your establishment.

“Pursuant to section 45(5) of the cited Act, you are hereby directed to recover the money advanced to the five officers and two staff from the Ministry of Health for the aborted trip to the Netherlands.

“You are further required to furnish the commission with evidence of compliance by each of the beneficiaries,” the letter stated.

Those directed by the commission to return monies include the reinstated NHIS boss, Yusuf, Nasiru Shinkafi, Shuaibu Muhammad, Naima Ilu and Yusuf Abdullahi.

This newspaper could not confirm whether the indicted officials returned the funds they got for a trip to the Netherlands, which they did not go.

In it, the anti-graft agency said it was investigating a suspected case of misappropriation of funds, fraud and abuse of office against the embattled NHIS boss.

“This commission (EFCC) is investigating a suspected case of misappropriation of funds, fraud and abuse of office against the above-mentioned person (Mr. Yusuf) during his tenure as executive secretary of NHIS between July 2016 to July 2017 and the need to obtain information from your office has become pertinent,” the letter reads in part.

Other information requested by the EFCC included document involving NHIS’ sponsored foreign trips embarked by Mr. Yusuf, vouchers on the fueling the official vehicles of the embattled executive secretary and document on the disbursement of NEEDS Assessment funds between July 2016 to July 2017.

Investigations by this newspaper showed that the NHIS supplied all the information requested within two weeks of receipt of the EFCC’s letter.

Shockingly, while the EFCC and ICPC were quizzing Mr. Yusuf and many key officials of the national health insurance agency, President Buhari in February ordered the reinstatement of the suspended executive secretary.

Multiple officials within the Presidency said the order to reinstate Mr. Yusuf was discussed and opposed by some of the president’s close aides who argued that doing do will hurt the administration’s anti-corruption war.

The aides’ discontentment significantly caused the recall of Mr. Yusuf to be delayed, our sources said.

One source, who cannot be named because he is not authorised to speak on the matter, said the president was not convinced.

The action instantly sparked harsh criticisms from many Nigerians, including the Chairman of the Presidential Advisory Committee on Anti-Corruption, Itse Sagay, who insisted that Mr. Yusuf should remain under suspension until he was cleared by the anti-graft agencies and or the court.

Some staff of the NHIS, who pleaded not to be named, told The NEXT EDITION that they had long been invited for questioning by the EFCC.

“Even on the day his reinstatement was announced, I can tell you that Mr. Yusuf was being quizzed at the headquarters of the EFCC. He had spent hours answering questions from EFCC officials when suddenly, the Presidency announced his reinstatement,” one of the sources told this newspaper.

“Two days after he resumed duties after he was reinstated, the EFCC invited some of our staff to their headquarters where they quizzed them for hours concerning some of the activities of Mr. Yusuf.

“Our people told the EFCC officials everything we know about issues they raised and confirmed some of the internal memos and vouchers which were presented to them but our fear is that the government is not serious about fighting corruption,” the source concluded.

However, ongoing investigation by this newspaper shows the EFCC and the ICPC appear to be closing in on Mr. Yusuf.

A letter from the EFCC dated February 28, with reference No: CR:300/EFCC/ABJ/CMIFS/Vol.8/0.30, shows the agency may be concluding its investigation on Mr. Yusuf.

The letter, which was obtained by this newspaper, was signed on behalf of the EFCC chairman by the agency’s Head of Operations, Ishaq Salihu, and addressed to the permanent secretary, Federal Ministry of Health.

Titled, “Investigative Activities,” the letter sought clarification on some of the deals which were sealed by the embattled NHIS boss.

“This commission is investigating a case in which the need to obtain certain clarifications from you has become imperative,” the letter from the EFCC reads.

Other information requested from the permanent secretary were copies of the Tenders Board resolution on Lot 18 contract for the purchase of NHIS project vehicle, Lot 19 contract for the replacement of window blinds with wooden Venetian-type and procurement of e-books and periodicals communicated to the office of the health minister for implementation.

The commission also sought a copy of the letter notifying the health minister’s approval of the NHIS Executive Management Meeting which authorised the appointment of Guinea Insurance Plc and Northlink Insurance Brokers Plc for an initial period of three years against the two years stipulated in the NHIS operational guidelines.

It also requested a copy of the letter from the NHIS seeking approval of the minister to remove the scheme’s Insurance Division from the Department of Planning, Research and Monitoring to the office of the executive secretary.

The letter was, however, received in the office of the permanent secretary of the Federal Ministry of Health on March 1 and forwarded to the Acting Head, Hospital Services of the ministry, O. J. Amedu, for immediate action.

Mr. Amedu in a fresh letter addressed to the embattled NHIS boss dated March 2 with reference number DHS/876/1/T1/68, directed him to respond to the issues raised by the EFCC.

“I am directed to refer you to the attached letter from the Economic and Financial Crimes Commission (EFCC) and to direct you to respond as requested in paragraph 2(a-f) of the letter.

“Your response to reach the Permanent Secretary, Federal Ministry of Health on or before the close of work on Monday, the 5th March 2018,” the letter reads. 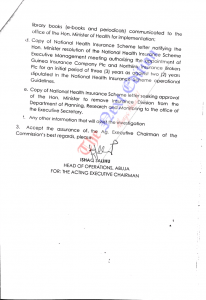 Findings by this newspaper show Mr. Yusuf is yet to respond to the memo over one month after it was delivered to his office.

However, when contacted on the telephone, Mr. Yusuf initially denied receipt of any letter from the office of the permanent secretary in the Ministry of Health.

But when pressed further, he asked this newspaper to go and ask the permanent secretary whether he has responded to the said letter.

“I don’t even know the letter you are talking about. Why don’t you go and ask the person who sent me the letter whether I have responded?

“Are you listening? Go and ask the person who sent me the letter, ‘Oh has this guy responded to your letter,” he said before cutting the call.

Attempts to speak with the spokesperson of the EFCC, Wilson Uwujaren, failed as calls to his phone would not connect and he would not respond to text messages from our correspondent.