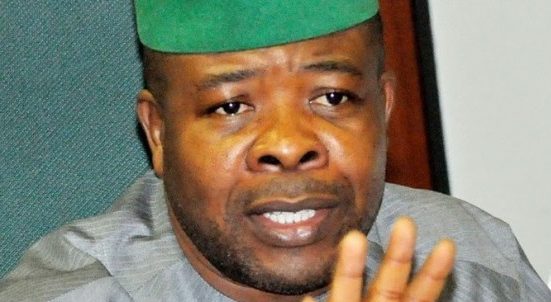 Newly sworn in Governor of Imo State, Emeka Ihedioha, has lamented the level of infrastructural decay left behind by the immediate past governor of the state, Rochas Okorocha.

Ihedioha spoke in Owerri on Wednesday shortly after being sworn in as Governor by the state Chief Judge, Justice Pascal Nnadi.

He described the eight years of Okorocha’s administration as a huge setback for Imo as he (Okorocha) disregarded the rule of law and good governance.

Meanwhile, Okorocha was absent at the inauguration ceremony.

Ihedioha, told the crowd that witnessed his swearing in that his government would focus on job creation, industrialisation, agriculture and healthcare issues in its first 100 days.

He said that his administration would offer free medical care for retirees and pregnant women.

Mr. Ihedioha also said he would review all land allocations and Certificate of Occupancy which the Okorocha administration approved hurriedly for his allies and return them to their original owners.

“Our citizens lost their lands to Okorocha’s government and I hold it as an obligation to the people of Imo to recover their lands,” he said.

He said he would respect the rule of law and support financial autonomy for the judiciary and the local government system.

He said Imo was financially insolvent and that it would be difficult to meet all the challenges facing the state in a short period.

“We don’t have the magic wand to solve all the problems but with the support of all I will try to deliver good governance and run an all-inclusive administration,” he said.

The governor said he would review the free education programme introduced by the past government and ensure that qualitative and more realistic system of education was achieved.

Ihedioha also promised to reform the civil service system to make the workers more productive and establish a facility management agency to care for government facilities.