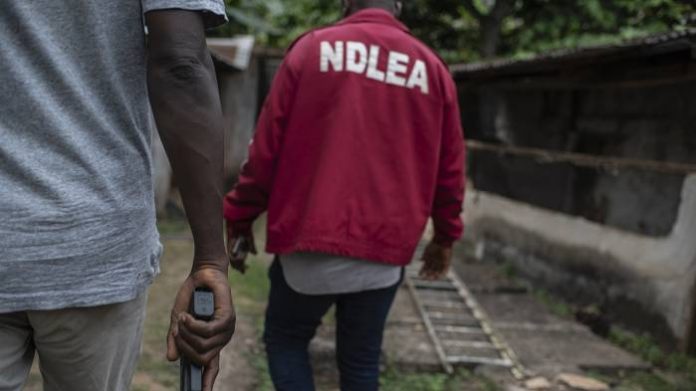 The Imo Command of the National Drug Law Enforcement Agency, NDLEA, said it has arrested one Mr. Uzochi Agbakwuru, an alleged notorious drug dealer in the state.

This was confirmed by the command’s Public Relations Officer, Mr. Uche Sampson, in a statement issued in Owerri on Wednesday. According to him, Agbakwuru was arrested on October 18 and is presently in the agency’s custody.

Sampson described as “spurious”, a petition by one Mr. Frank Agbakwuruibe, urging Gov. Emeka Ihedioha to order the “unconditional” release of Agbakwuru by the agency.

He described the suspect, who hails from Umuemeri Ogwu, Aboh Mbaise Local Government Area of Imo, as “a notorious drug peddler.”

He stated that the suspect had been on NDLEA’s criminal watch list for over 18 months before his arrest.

Sampson also stated that previous attempts made to arrest him were unsuccessful “because of his strong counter-intelligence network.”

According to the statement, 150 grammes of dried weeds confirmed to be cannabis sativa were allegedly found in his possession.

He described the offence as a violation of the provisions of NDLEA Act, hence the resolve by the agency to track him down “by means of tactical decoy and subterfuge.”

The NDLEA spokesman said that the suspect was arrested at his residence, where he attempted to escape.

He alleged that the suspect raised false alarm, calling on his criminal associates and sympathisers, who later turned violent in order to obstruct NDLEA’s legitimate duty.

Sampson alleged that the sympathisers attacked the agency’s operatives and their operational vehicle with machetes, stones, iron and other dangerous objects.

He said that the operatives sustained varying degrees of injuries, while the vehicle was seriously vandalised.

Sampson said that the matter had since been filed before the Federal High Court, Owerri.

He said that after the arrest of the suspect, he was given adequate first aid treatment.

“We wish to condemn the description of the arrest and detention of Agbakwuru, a notorious drug dealer, who has been on our watch list.”

“It is noteworthy that the suspect later volunteered his statement under caution in which he claimed ownership of the 150 grammes of cannabis sativa found in his possession,” he said.

The NDLEA officer thanked the suspect’s kinsmen for their solidarity and cooperation with the agency during his arrest.

He gave assurance that the suspect would continue to enjoy “all the rights relating to care and custody of suspects,” pending his arraignment or transfer to any other detention facility outside the NDLEA.