Home News Top News I’m Stepping Down To Pave Way for Euro 2024, Not Over Spain... 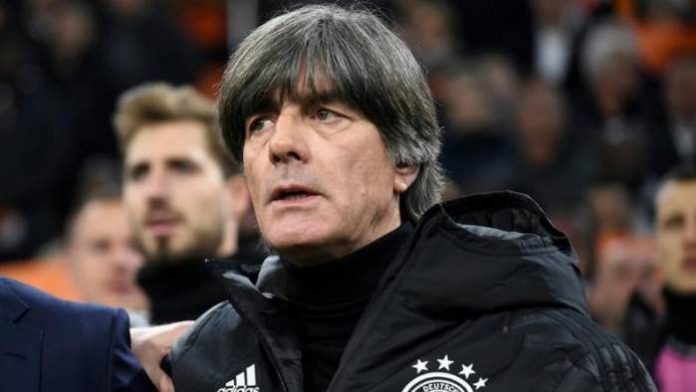 Germany coach Joachim Loew on Thursday said he was not stepping down in summer because of last year’s 6-0 debacle in Spain.

He said the move was rather to give his successor more time to prepare the new-look team for the 2024 home Euros.

Loew told a news conference this should lead to an “explosion” and he doesn’t see himself in this position by then.

“A tournament in one’s own country can move a lot, above all renovate,” Loew said.

World Cup winner Loew had on Tuesday announced that he would resign after 15 years following this summer’s Euro tournament, which was postponed from 2020 owing to the coronavirus pandemic.

“Already last year, regardless of the Spain match, I had planned to think about it [stepping down] concretely in February, March. Where do we stand? Where do I stand? What do I want?,” Loew said on Thursday.

“I came to the conclusion that after this Euro tournament the time has come to move on. It’s a time for renewal, change and movement.

“I have always said that the team needs space and time and development. This should in no way fail because the coach is glued to his chair.”

But Loew also emphasised he wants to “achieve the maximum once again” at the upcoming Euros where Germany face a tough group stage against world champions France, title holders Portugal and Hungary.

He said his focus is on the continental tournament and that he has not “thought concretely how his future will look like after the competition.”

“My players are intelligent and ambitious —- regardless of the coach’s decision. My decision will not give them that special kick. They always want to win,” he said.

Loew, however, has already ruled out a position at a Bundesliga club in the past.

German football federation (DFB) president Fritz Keller said “Loew heralds a new era with his decision. I am of the opinion: at the right time”.

DFB director Oliver Bierhoff added he was “not struck by the news,” but very much regrets the resignation.

Loew, who had a contract until the 2022 World Cup, won the 2014 World Cup and 2017 Confederations Cup.He reached at least the semi-finals at four more events before Germany crashed out in the group stage of the 2018 World Cup.

That led to a reshaping of the team which is ongoing.

It is producing mixed results such as qualifying for the Euros but also the biggest defeat in a competitive match, the 6-0 Nations League meltdown in Spain.

“Fifteen years is a long time. I’m personally very, very grateful to my employers, the DFB. They always trusted me,” Loew said.

“I’m very grateful to the people who were around in this long journey,” Loew added, naming Bierhoff, his current assistant Marcus Sorg, and former assistant Hansi Flick, now at Bayern Munich.

Loew said he’s very proud of the joint success, but also grateful for the defeats “because we learn from them and become stronger.”

The DFB now has the task to find a new coach whose first match will be World Cup qualifiers in September.

Keller emphasised that quality and a long-term approach have bigger importance over speed in the search for a coach.

Bierhoff said he won’t comment on any candidates in the near future.

But he said “currently I don’t see a foreign coach” at the national team and that he would never rule out a woman to take the job.

Asked about Flick, Loew praised the many years they worked together, but “it’s not my place to talk about my successor.”

Almost a quarter of Germans said to a YouGov survey they would like to see Juergen Klopp as the next national team coach.

Of the 1,618 participants, 24 per cent named Liverpool’s Klopp their preferred candidate, while nine per cent chose Flick.