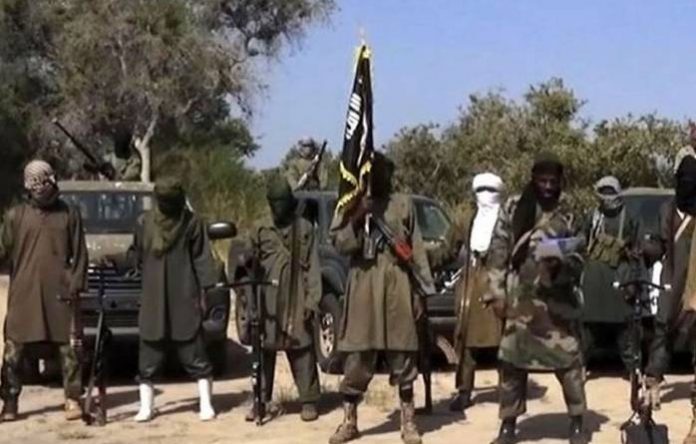 Eyewitnesses who escaped Boko Haram ambush at Kaliyari, near Lantewa along Damaturu-Gashua Road on Friday said the insurgents mounted a checkpoint on the highway and operated freely for more than two hours.

Lantewa is 75 kilometres away from Damaturu, the Yobe State capital.

According to some of the eyewitnesses the insurgents staged the checkpoint operation with a rickety military vehicle within a range of about one kilometre, stopping motorists from both sides of the road and demanding their ID cards.

They were allegedly looking for three categories of individuals; security operatives, civil servants or Christians.

According to The Nation, one of the travelers, name withheld, who said he witnessed the operation for more than one hour before he was miraculously released by the insurgents, said that they left the place unhurt because none of them had any form of ID card on them.

He said: “We ran into their checkpoint and they asked everybody to come down.

“When we came down, they told us that they were looking for three sets of people: security agents, civil servants and Christians.

“They searched our pockets but none of us had an ID card on them. We sat on the ground with them for more than one hour.”

The source also said he saw a vigilante Hilux van that ran into the checkpoint and the insurgents opened fire on its occupants, pursuing them into the bush.

He said: “We were coming from Dapachi and I sighted a vehicle painted in military colour. When I sighted them, something told me that I had entered into the hands of Boko Haram people.

“I was the one that sighted them first because I sat in the front seat of the Sharon vehicle. Initially, I thought they were just coming to the road, so we could escape, not knowing that there were others in front.

“We left Dapchi to Damaturu and got to that place around 10.30 am. If you’re a following this road, if you pass Lantewa, you will get to a new tarred road before Kaliyari. Between Lantewa and Kaliyari was where the insurgents mounted the checkpoint.

“They were many and they covered a distance of almost one kilometre.

“There was a vigilante car that was coming from Damaturu. As they arrived at the place, they opened fire on them, the vehicle went off the road and they followed them into the bush, pursuing them until they caught them.

“While those ones were operating, the other ones held us from another end. So, I think they were many.

“I had some documents on me but they were inside my bag in the car.

“They asked us to remove everything from our pockets. We removed everything but no one was found with an ID card.

“I told them I am a businessman. Our saving grace is that they did not search our vehicle.

“They were doing the operation on our car when that vigilante Hilux came. I think what saved us is that their attention was on that vigilante car that some of their members were pursuing.

“We were together with them for almost one hour, seated on the ground. It was only God that saved us.

“But there were about 10 cars from our side. As they left us to pass, I also saw many vehicles at the other end and people were still being held. I suspect they left with many people.

“Even the vigilante car, they collected it and occupied it themselves.

“It was only God that saved me because I am a civil servant but my saving grace is that they did not check our bags.”

The Nation also reported that a top vigilante commander in the state, who pleaded anonymity, confirmed that his boys were killed, but he did not say how many of them were involved as he seemed to be speaking from the scene of the incident.

Meanwhile, the Acting assistant Director Army Public Relation Sector 2, Operation Lafiya Dole, Damaturu, Lt. Chinonso Oteh, has called for calm asking the people not to panic as the army was in control of the situation.

In a statement tilted ‘Sensitization on the General Public to be Calm and not Panic in Yobe State,” he said: “Headquarters Sector 2 Operation LAFIYA DOLE in its continuous determination for the protection of lives and properties as well as the safety of law abiding citizens wishes to reassure the good people of Yobe State and all other residents within its Area of Responsibility, not to panic as there is no cause for alarm.

“In a bid to further decimate the remnants of the Boko Haram Terrorists/ Islamic West Africa Province hibernating within the sector 2 Area of Operations, troops have intensified their operations and residents are hereby advised to be calm and not panic on sighting movement of troops, helicopter, vehicles and equipment.

“This headquarters also wish to appreciate the cooperation of the good people of Yobe in the fight against insurgency. Members of the public are enjoined to always report any suspicious movement of an individual or group to the nearest military formation, call or send text message to: 08138890503, 09092779045, 09010163383 and 08155040499, for prompt response.

“You are please requested to translate this message into our local languages and disseminate through your medium to the general public.

“Thank you for your usual cooperation.”