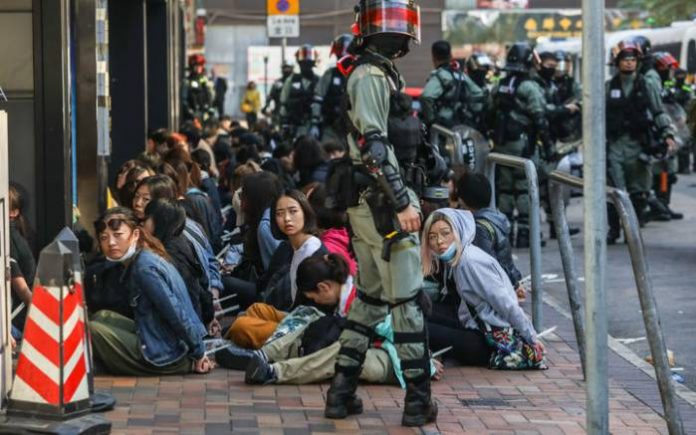 Police are surrounding a Hong Kong university campus after a fiery overnight stand-off with hundreds of protesters inside.

Dozens of protesters tried to leave after sunrise but turned back as police fired tear gas and rubber bullets.

The police said tear gas was fired because “a large group of masked rioters…suddenly charged at cordons”.

In the afternoon, another group of protesters tried to run from the campus but many were arrested.

The group of around 100 tried to leave Polytechnic University by a tunnel entrance, but as police fired tear gas, a number were detained.

Others from the group then retreated to the campus.

Police officers had previously said protesters could leave the campus via Cheong Wan Road South Bridge, but urged them to drop their weapons and remove their gas masks.

But one pro-democracy legislator inside the campus, Ted Hui, said the bridge had already “been sealed off” – and it was not possible to leave this way.

Some 1,000 people – many of whom are students – still remain on campus, according to Mr. Hui.

He added that many on campus were injured and cut off from medical services, calling it a “dire” situation.

The acting president of PolyU’s student union Ken Woo had previously told broadcaster RTHK that at least 500 people remained inside the campus.

He added that fresh water was available, but food supplies were running low. Demonstrators have been occupying the site for days, as Hong Kong’s violent protests continue to escalate.

Earlier, the head of the university, Professor Jin-Guang Teng, released a video statement to protesters, saying he had arranged a deal with the police.

If protesters left peacefully, he said he would “personally accompany” them to the police station where he would “ensure your case is fairly processed”.

Meanwhile, a Hong Kong court has just ruled that the government’s anti-mask law is unconstitutional.

In October the government invoked a colonial-era emergency law to make wearing masks illegal. However, protesters have largely defied this and continued to cover their faces to hide their identities.