Gunmen killed 21 people in Wednesday night’s attacks on four Kaduna State villages, the Police said on Thursday.
An unspecified number of houses were burnt by the marauders, including one belonging to a dead colonel.

However, the Southern Kaduna Peoples Union (SOKAPU) disagreed with the police on the figure of the dead and on the number of villages attacked.
A statement by its spokesman Luka Binniyat claimed that 33 villagers died and that five communities and not four were attacked.

The group said: “Last night (Wednesday) 33 Atyap natives, who were among hundreds of thousands of already starving indigenes under a 24-hour curfew, were killed in Atyap villages in Atyap chiefdom, Zangon Kataf Local Government Area in Southern part of Kaduna by Fulani militia.

“Prior to now, they were all shutdown with fierce armed military men patrolling and enforcing the 24-hour curfew. But when the gunmen struck, they were not on the ground.

“Four Atyap youths from Majuju, and Kibori villages who went to farm under the curfew were arrested by soldiers after being thoroughly beaten and handed over to the Police who whisked them to SCID, Kaduna. They have been denied bail since 26th June, 2020.

“Last night, around 11p.m, truck-loads of armed Fulani militia made their way through military checkpoints under the curfew and stormed Apiashyim and Kibori villages. They laid siege to Apyaishyim, killing, looting and burning houses. In the wake of the cruelty, they left six people dead, and 20 houses burnt.
“In nearby Kibori village, seven persons were killed by the marauding, pampered Fulani militia .

“Around 12a.m, they struck Atakmawei sleeping community and carried out another carnage after which 12 persons were killed and 10 houses burnt.
“They also went to Apyiako and killed three people, and burnt homes, including the home of late Col. Bobai Ishaku, among others.

“At the same time, Magamiya village was also attacked and five people killed and seven houses burnt. The attackers operated between 11p.m and 4a.m this (Thursday) morning before they left unchallenged.”

The group accused Governor Nasir El-Rufai of “tying up our law-abiding people under an irrational, protracted curfew which is obviously intended to cause maximum harm to our communities.”
A source said the attackers of the villages operated unchallenged, having taken advantage of an all-night rain.
The source said: “It rained all through the night in the area and the attackers had unchallenged operations from around 10p.m Wednesday which entered early hours of Thursday (yesterday).

“By the time they were done, 22 bodies were recovered at about 12p.m today (Thursday) but we are still conducting searches. They also burnt several houses.”

A resident of Atak’mawei, Irimiya Gandu, said no fewer than 13 persons were killed and many houses burnt down in the community.

According to him, “around 1a.m, I was already asleep when I heard gunshots. I stepped out from our compound and found out that the sound was from nearby Apia’akum and Kibori villages. I rushed into my house and brought out my families and we ran to a safer place.
“So far, 13 persons, mostly children and women were killed. We are still looking for more bodies. Many houses were burnt also,” he said.

Also, a survivor in Apia’ahko, Samson Alat, said an aged man, a child and a youth were killed in the village by the bandits.

“They burnt the house of late Col. Ishaku and five other important houses and stole from the village,” he said.
According to him, “soldiers came on motor bikes and an armoured tank, but they could not stop these wicked people. We were hiding inside maize farm and we saw them. This was around 1a.m last night. We are still looking for more missing people,” he said.

A resident in Apiashyim, Jonathan Ishaya, said seven persons were killed during the attack by the bandits who also tried to raze down the village. 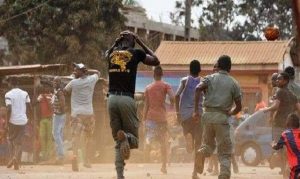 In neigbouring Katsina State, a group of youths barricaded the ever-busy Zankara–Katsina highway in Turare, lamenting the worsening security in the area and other villages in the state.

The placard-carrying youths waved green leaves as they chanted war songs and warning that they might be forced to take their destiny in their hands if the state and Federal Governments failed to rescue their areas from the bandits.

One of the protesters who, craved anonymity, lamented that the bandits had in one of their attacks rustled and carted away unspecified number of sheep from the affected communities.

”Residents of the affected villages who survived the deadly attacks have since fled to Dutsin-ma, the headquarters of Dutsin-ma Local Government Area for safety,” he said.

President Muhammadu Buhari has urged heads of security agencies to promote and implement a well- synergised security philosophies to address the security challenges facing the country.
He made the call at the graduation of the National Defence College Course 28 on Thursday in Abuja.

The President, who was represented by the Minister of Defence, Maj. Gen. Bashir Magashi (rtd.), said in spite of various challenges, the nation had remained strong and vibrant.

“In spite of all of these, our faith in the nation is unshaken. Our resolve and will to take the nation to greater heights are strong,” he said.
The President said that there was need to work together for the nation to get better.

To do so, according to him, requires a fundamental philosophy of deliberative, continuous and consolidated improvement in all aspects of our national life.
He said: “We must continuously harness the strengths of our national diversities; we must promote “Nigeria first” in all our doings; we must bridge political divides and engage in political re-engineering based on equity and mutual trust.

“Moving forward, the armed forces and all the security agencies must promote and implement comprehensive security philosophies and measures driven by long established principles of synergies.
“This should be through interagency cooperation, defence transformation and reorganisation, expansion and modernisation of the military to make it fit for purpose; as well as a high morale of the men and women of the services and security agencies.

“I call on the heads of security and defence services to make these aspirations to fully come to fruitions quickly.”